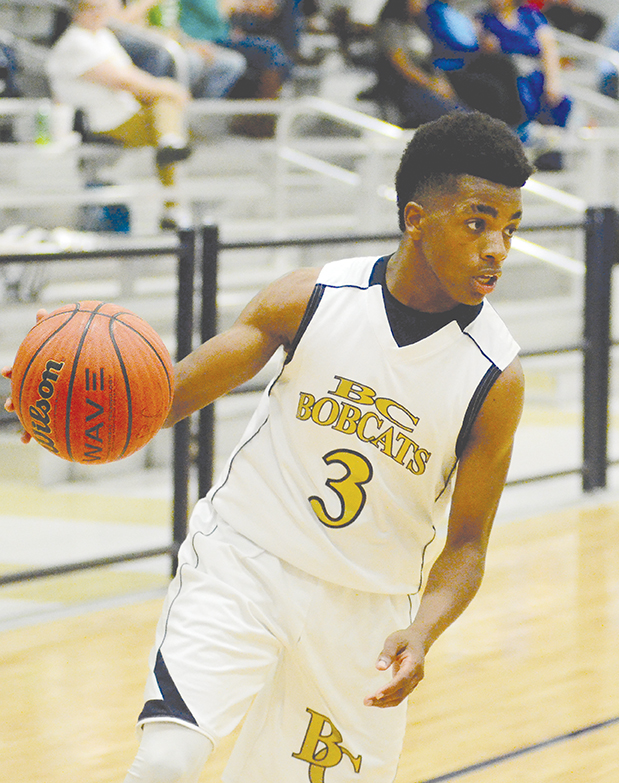 Photo by Dylan Rubino/LaFredrick Dillon (3) drives to the lane in a game earlier this season.

The West Marion Trojans defeated the Bogue Chitto Bobcats in a non-district contest by a score of 60-46 Tuesday night.

The Trojans came out of  the locker room with a fastpaced offense and were able to go up by 10 early in the first quarter. The Bobcats climbed back into the ballgame, but the Trojans stretched their lead with several three-point shots starting to fall after forcing crucial turnovers.

The Trojans took a commanding 33-12 lead heading into halftime. The Bobcats showed some fight when they came out of the locker room to start the third quarter. The Bobcats outscored the Trojans 34-27 in the second half, but it wasn’t enough to get the victory.

“We started out slow offensively, but we were able to get into our groove in the second half,” Bogue Chitto head coach Mark Pitts said. “Unfortunately, our first half was very sloppy. We have Mount Olive on Thursday, so we got to get back to work and improve every day.”

The Lady Cats of Bogue Chitto defeated the Lady Trojans of West Marion 46-31 in a non-district game Tuesday night at West Marion High School. The victory moves the Lady Cats to 9-9 overall on the season.

The Lady Cats played at a quicker pace than West Marion and took a 11-6 lead at the end of the first quarter.

The duo of senior guards Taneshia May and Terrah Nelson led the Lady Cats in the first half, resulting in a 20-14 lead at halftime.

The Lady Trojans came out of the locker room with a slower pace in the second half, which helped Bogue Chitto control the tempo the rest of the game, resulting in a 44-31 victory.

“We started slow offensively but we were able to finish strong in the fourth quarter,” Bogue Chitto head coach Christi Terrell said. “It was a great win for us and I am proud of the girls’ effort throughout the game to get the win.”

The Wesson Cobras dropped a high-scoring contest Tuesday night to Wilkinson County by a final score of 84-74.  The loss... read more