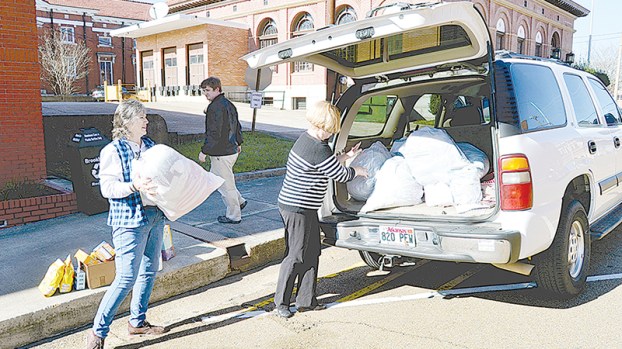 Photo by Donna Campbell/Becky Green (left), Paden Phillips and Virginia Sparks, all members of First United Methodist Church Brookhaven, load donations in an SUV Tuesday that will go to people in the Hattiesburg area devastated by an EF-3 tornado that tore through Forrest County Saturday morning.

Bogue Chitto Principal: ‘It could happen to us’

Principal Jay Rayborn looks at his school, standing tall in the Bobcat Nation, and knows it could just as easily be a pile of rubble.

Tornadoes can do that.

That’s why the Bogue Chitto administrator wants to help his friend and fellow principal Rob Knight. Knight’s school, Petal Upper Elementary, was severely damaged by one of the tornadoes that ripped through their community in the early morning hours Saturday.

The displaced students are meeting for classes at a Baptist church, even while some of them lost their uniforms, books, supplies and their homes. School goes on, Rayborn said.

“They’re having school at Petal Harvey Baptist Church. They’ve opened their doors to them,” he said.

He talked to his high school buddy Saturday. “He said, ‘Man, my school got hammered,’” Rayborn said. “We just felt like they would do the same thing if it was one of us. The reality is, it could happen to us.”

To help with his students’ immediate needs, Knight recommends sending Wal-Mart and Visa gift cards. Donations will be collected in the Bogue Chitto Attendance Center office office through Feb. 3.

“They’re going to have some students and some families in dire need,” Rayborn said.

Within hours of putting out a call for collections Saturday, First United Methodist Church of Brookhaven had enough supplies to fill two SUVS and the back of a pickup truck and they were headed to Hattiesburg, said youth coordinator Becky Green.

Green’s son, James, a sophomore at University of Southern Mississippi, is a youth intern at Court Street United Methodist Church and is helping coordinate a relief effort to get supplies to some of the harder hit areas of town.

“We were real concerned about the people and wanted to do something in that area because of our connection,” Green said.

“From what the pastor said, this damage is much more devastating than the tornado that came through four years ago.”

Supplies can be dropped off Monday through Friday at the church office at the corner of West Cherokee South Church streets.  For more information, call 601-757-2495.

Youth director Paden Phillips said their participation in the area’s recovery won’t be limited to water and food. He’s planning a mission trip for the ninth- through 12th-graders this summer to help with construction projects.

Reed’s Metals is offering their facility on East Lincoln Drive as a drop-off point for supplies.

“We’ll be a distribution point for anyone in our entire community who wants to donate,” said Jessica Breazeale, marketing and PR director for the Brookhaven-based company.

“Reed’s Metals is heartbroken for all those who were affected by the recent storms,” she said. “We want to help.”

The business has a large trailer to haul supplies to Forrest County.

“We’d love to pack it down,” she said. “We’d love to take it there every day, and we will for as long as we get donations.”

According to the Mississippi Emergency Management Agency Tuesday, more than 1,400 homes were damaged in eight counties — 715 of them were destroyed or sustained major damage.  There were also four confirmed deaths and 60 injuries from tornadoes and severe storms .

Mullen Gymnasium was louder than ever Monday as anxious fans watched the Co-Lin fend off Southwest in the final minutes... read more