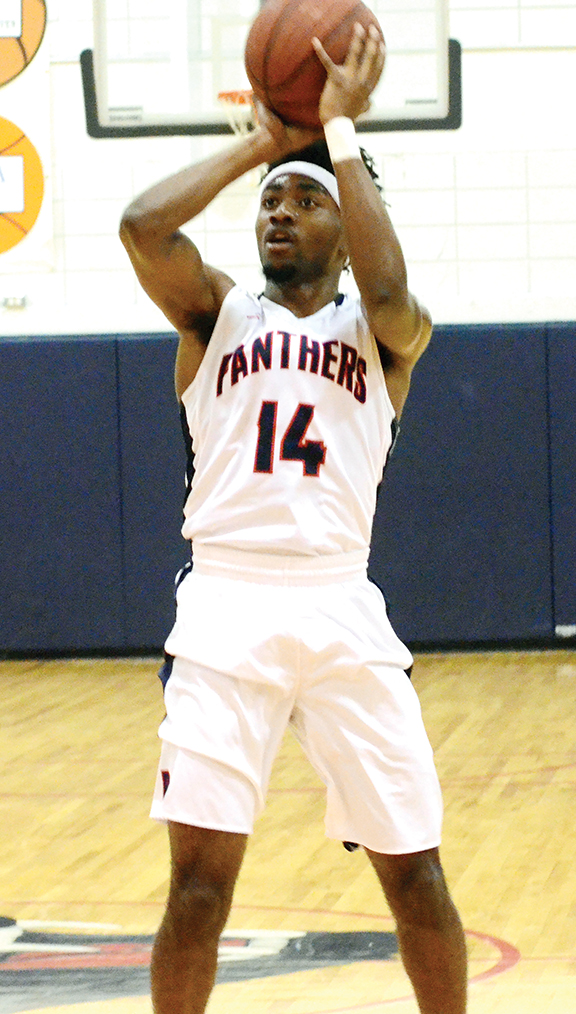 Damarius Brooks of Brookhaven (14) pulls up from deep in their 64-62 loss to district opponent Provine Tuesday night. (Photo by Dylan Rubino)

Coming off two district wins in a row, the Brookhaven Panthers had momentum heading into their district matchup against Provine Tuesday night.

Provine had momentum as well, coming into the matchup winning three games in a row and starting off 2-0 in district play. The Rams would continue that momentum Tuesday night as Brookhaven dropped a tough district game by a score of 64-62.

It was an important game for both sides as the victory gives Provine the edge in the district standings.

“Each game night, we play against the odds and regardless of the outcome, we are victorious,” Brookhaven head coach Jimmie Butler said. “We are so proud of them.”

The first half was a seesaw affair as Provine took a 15-11 lead at the end of the first quarter, but the Panthers swung momentum in the other way by outscoring the Rams 14-9 in the second quarter, taking a 25-24 lead at halftime.

The third quarter switched in favor of Provine as they forced some Brookhaven turnovers and turned them into points. The Rams slowed the game down and held Brookhaven to 12 points in the quarter. The game started to favor Provine and looked to be in their favor the rest of the way as they took a 41-37 lead heading into the final quarter of play.

It was an offensive show from both schools as they combined to score 48 points in the quarter. Brookhaven would outscore district foe Provine 25-23 in the quarter, but the result was a two-point, heartbreaking loss for the Panthers.

Butler has seen his team improve from the start of the season, and the game Tuesday night is no different. The scoreboard may say a loss, but his team’s effort is what keeps them going.

“This team consists of a group of players that have overachieved their abilities and it is a result of hard work,” Butler said of his team.

Senior guard Damarius Brooks made clutch shot after clutch shot for Brookhaven all night long, scoring 25 points for the game and kept his team in it. Senior point guard Danarius Gray was also a dominant offensive force for the Panthers, scoring 20 points.

The Panthers showed a lot of heart and fight even in defeat Tuesday night and if they play with that same fight, they can make things right and win their last four games of the season.

The Brookhaven Lady Panthers are the hottest team in Lincoln County right now, winning five games in a row, capped off with their 44-37 over district opponent Provine.

The Lady Panthers are now 9-11 on the season and 4-0 in district play.

Both Brookhaven and Provine got off to a slow start in the ballgame, as the Lady Rams took a 7-5 lead at the end of the first quarter.

The defense for the Lady Panthers clamped down in the second quarter, holding the Lady Rams to only four points in the quarter, resulting in a 16-11 lead going into halftime.

The two schools went toe-to-toe in the third quarter with Provine getting the edge 10-9, with Brookhaven holding a 25-21 lead heading into the fourth quarter.

It was a high-scoring fourth quarter as the Lady Panther held a 19-16 scoring edge and took home the important district game 44-37.

Next up for Brookhaven is a home district game against Natchez Friday night. The Lady Panthers get things started with tipoff at 6 p.m.

Patriots and Dirty Birds: An early look at Super Bowl 51

Getting an early look at Super Bowl 51, there are many reasons to root for both teams in the big... read more