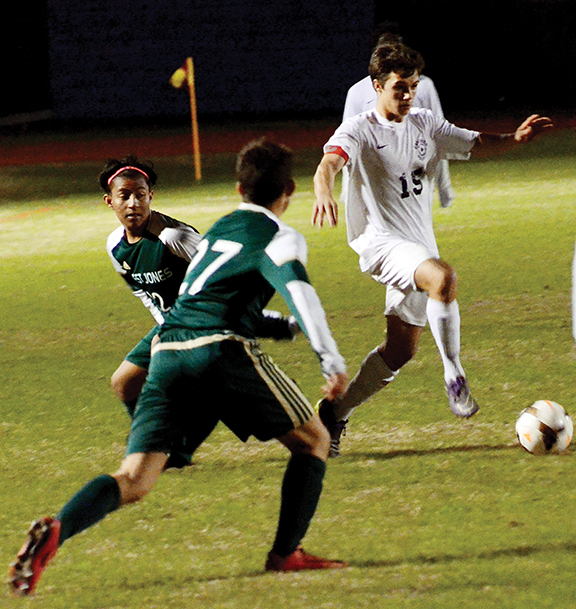 A storybook season for the Brookhaven soccer team came to a heartbreaking end in the 5A playoff game against West Jones Tuesday night.

Entering the playoffs with a 10-3 overall record and claiming the title of district champions, the Panthers had lofty goals and looked to make a run in a very competitive 5A field.

That run came to a disappointing end when West Jones junior Javier Ramirez put it in the back of the net in extra time to knock off the Panthers.

Players dropped to the field with hands on their faces as the look of shock and disbelief ran through the rest of the team.

The season did end, but the fight and effort never faded as Brookhaven had one of its best seasons in school history.

“It was a real disappointment. My team fought all game to try and pull it out. Just to have it come down the way it did, it was tough,” Brookhaven head coach Aaron Ayers said. “It’s never fun to lose like that. I’m proud of the effort they put in the whole game.”

As a first year head coach, Ayers took on the challenge of continuing the recent success of Brookhaven soccer. The work started in the summer when Ayers challenged his players to be great and put them through summer workouts and training programs to get them ready for the hurdles that would come.

“To me, this is the best season we’ve had and it all started in the summer,” Ayers said. “Our seniors took on the responsibilities and the challenges real well and it showed throughout our team.”

As a former player and assistant coach, Ayers learned from his past experiences and used them to his advantage. The Panthers dominated opponents through the regular season, scoring 45 goals and only giving up 14. A lethal offense mixed with high-pressure defense carried Brookhaven.

“Being a first year head coach, I’ve learned a lot from my experiences and being an assistant coach in the past,” Ayers said. “We’ve become more familiar with our players and we put them in the best position to win, strive and improve each day.”

It’ll be the same story for the next season as seniors will graduate and move on and a new crop of younger players will take on larger roles and more playing time. Ayers believes his players will be ready for the challenge.

“It will be the same thing we did for our players over the summer. We’re going to challenge our players that are coming back to do bigger and better things,” Ayers said. “A lot of players have been waiting for their opportunity and this time it will come.”

The loss Tuesday night in the 5A playoffs can be used as a learning experience for the players coming back and the Panthers will be ready for the opportunity that lies ahead next season.

“Out of all my years playing and coaching, I’ve never seen a group of guys put in so much effort and put in all the work,” Ayers said of his team. “They came together as one team with one goal in mind. It’ll be the same for next season.”

The Brookhaven Lady Panthers also had their season come to an end Tuesday night as they fell to West Jones 12-1. The Lady Panthers ended the season 6-6 overall and were also district champions, going 4-0 in district play.

The West Marion Trojans defeated the Bogue Chitto Bobcats in a non-district contest by a score of 60-46 Tuesday night.... read more