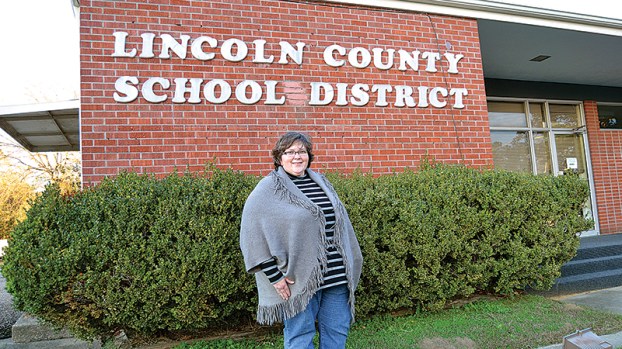 Photo by Brett Campbell/Joanna Posey was appointed to the Lincoln County School Board earlier this week to fill the seat left vacant when her father-in-law, Michael Posey, completed his two six-year terms. Elections will be held in 2018 for the District 5 seat.

The Lincoln County School Board lost a Posey this month, but gained another one.

Joanna Posey was appointed this week to represent District 5, filling the chair left vacant by her father-in-law, Michael Posey.

Michael Posey served two six-year terms, and stepped down at the end of his second term at the close of 2016. The district office hosted a farewell reception for him Jan. 10 before the board meeting.

Because Lincoln County’s school board election rotation was out of sync with the rest of the state, an election in November 2016 to fill the District 5 seat would have kept the county out of rhythm. The solution arrived at by board attorney Jim Keith and Attorney General Jim Hood was for the board to appoint a representative from the district until the correct election date, which will be in 2018.

After two weeks of searching, board members found a replacement in the same family. Before he left, Posey recommended his daughter-in-law. The board approved and asked her to fill in until 2018.

Posey is a Lincoln County native, and attended Brookhaven public schools from grades two through 12. Her mother is a former librarian at Brookhaven High School.

“I’m active at the school and my kids are very involved,” said Posey. “Public education is very important and if I can do anything to help, I will.”

Posey said she had been considering running for the board at the next election, and some members of the community had approached her about doing so. When the board offered her the opportunity to serve, she was eager to dive in.

“I’ve got a lot to learn,” Posey said, “but I want to help if I can help – anything I can do to improve our schools.”

Ray Gates knew music. He could remember the lyrics of most ol’ timey gospels and loved to belt them out... read more