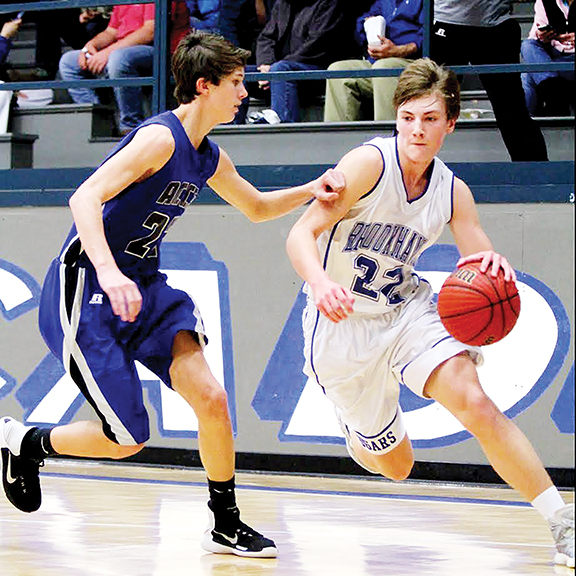 Tate Felder of Brookhaven Academy (22) drives past the ACCS defender Friday night in their 45-38 victory. (Photo by Dylan Rubino)

The Brookhaven Academy Cougars and Lady Cougars matched up with the Rebels of Adams County Christian School Friday night in what turned out to be competitive games with each coming down to the end. The Cougars held off a fourth quarter charge by the Rebels to pick up the 45-38 win, but the Lady Cougars could not find the bottom of the net down the stretch, dropping the matchup by final a score of 53-46.

The BA Cougars (20-8) held a comfortable 25-13 lead at halftime only to see the Rebels pull within three points in the fourth quarter. After some key free throws by guard Luke Jackson, the Cougars were able to hold off visitors from Adams County by a score of 45-38.  Cade Brown led the Cougars with 11 points, seven rebounds and five blocks for the night. Ethan Nations added nine points and eight boards in support. Darius Demby led the ACCS Rebels with 12 points.

The BA Lady Cougars (18-10) and Lady Rebels from ACCS were knotted up at 35 points each entering the fourth quarter. ACCS used an 18-11 run in the final frame to knock off the Lady Cougars and hold the top spot in the district standings. Jana Case led BA and all scorers with 25 points and seven rebounds. Baily Boyd led the Lady rebels with 21 points.

The BA JV Lady Cougars held on to a lead of the district standings by knocking off the visiting Lady Rebels by a score of 34-25. Maggie Sanford and Makayla Martin led the way for BA with seven points each. AB Warren chipped in six points in support.

The BA JV boys took care of business by controlling the tempo offensively and defensively to knock off the JV Rebels by a score of 39-28. Brady Spring led the Cougars with 16 points. Gavin Brogden added 12 points to the BA scoring column for the game.

The Brookhaven Academy Cougars will be back in action Tuesday afternoon as they travel to Jefferson Davis County to take on the Prentiss Christian Saints. Seventh grade basketball gets the afternoon of basketball started at 3 p.m.