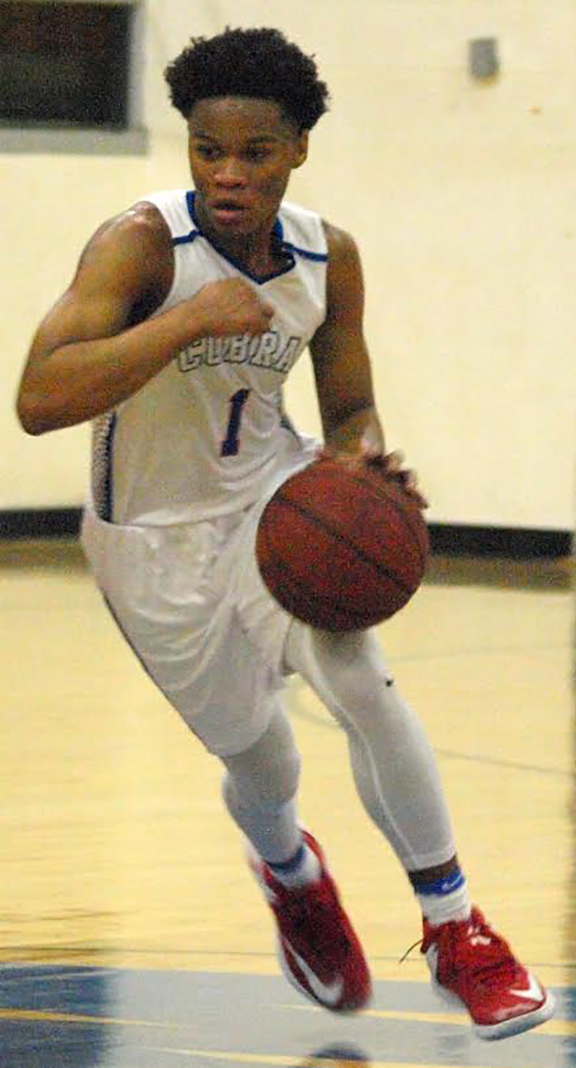 Shemar Dickerson of Wesson (1) dribble sup court in their loss against Wilkinson County earlier this season. (Photo by Tracy Fischer)

Friday night was the game to see this season for the Wesson Cobras.  Wesson faced off with the Jefferson County Tigers and finished on top in a game that almost went into double overtime, but a last second shot by sophomore guard Shemar Dickerson put Wesson ahead at the buzzer 78-75.

“This was a big win for us tonight. I am proud of my guys for fighting hard all night,” Wesson head coach Rusty Newman said. “Jefferson County is a good team and made it tough for us to close out the game. I hope we can continue to play with this type of intensity from here on out.”

The Tigers led in the first quarter and held the lead going into the half by a score of 29-25. The Cobras came back after the half on fire. Sophomore forward Jontavius Smith scored a basket to put the Cobras ahead for the first time in the middle of the third quarter. The Cobras scored 29 points in the quarter to take the lead 54-39 and the end of third.

The fourth quarter was a battle on the court and in the last few minutes of the game, the Tigers tied the game up and sent it into overtime.

Jefferson County had four players foul out in overtime, but was able to keep up with the Cobras. The score was 75-75 in the last 14 seconds of the game when the Tigers lost possession over a turnover.  Dickerson worked the ball down the court for a layup as the buzzer sounded to give the Cobras the lead.   He was fouled on the shot and made the free throw to bring the final score to 78-75.

Dickerson was the top scorer of the game for Wesson with 24 points and Smith followed with 15 points.  Both senior Will Hulon and freshman Kenner Bizot had 11 points and sophomore guard JD Allen had 10 points for the game.

For the Tigers, senior guard Nico Griffin was the top scorer with 20 points and added on four rebounds and two steals. Junior guard Joshua Day added on 16 points for the game and sophomore guard Rashard Short chipped in with 11 points.

The Jefferson County Lady Tigers traveled to Wesson Friday night and came out on top by a final score of 56-43.

The game started with the Lady Cobras taking 27-19 lead heading into the locker room at halftime. After the break, the Lady Tigers came back strong and put up 22 points on the board during the third quarter to take the lead.  Jefferson held on tight to their lead and took the win.

“We played really well in the first half.  Offensively, we moved the ball really well and played good defense.  The third quarter really hurt us,” Wesson head coach Candice McDuffey said. “Overall, I was proud of the fight the girls put forth and if we keep improving, I firmly believe we’ll be where we need to be by the time of the district tournament.”

Sophomore center Dea’Breaun Turner was the top scorer of the game for Jefferson County with 21 points and reeled in 20 rebounds as well. Junior guard Kailyn Hammett with added on 15 points and sophomore guard Ciara Pree chipped in with 10 points.

Wesson will travel to Hazlehurst Tuesday to face the Indians. Game times are 6 p.m. for the Lady Cobras and 7:30 p.m. for the Cobras.

After a disappointing loss to Provine earlier in the week, the Brookhaven Panthers bounced back in a big way Friday... read more