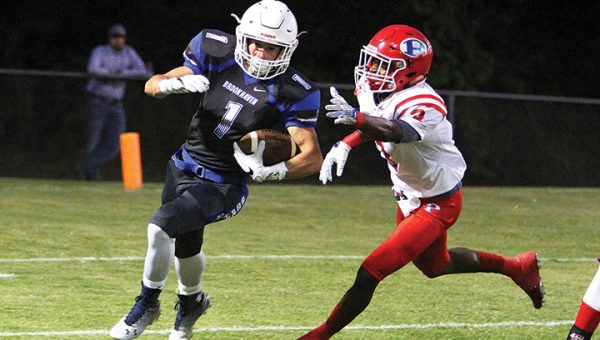 The 10-game regular season schedule features games between the Cougars and one 3-A school, six 2-A schools and three 1-A MAIS schools.

The Cougars, who were reassigned to the 2-A level for all sports for next two seasons, lifts the lid on the season with a pair of schools from Natchez. The Cougars will play host to Cathedral, a 3-A school in the new MAIS realignment, on Aug. 18 and travel to the tri-centennial city to battle 1-A competitor Trinity Episcopal on Aug. 25.

The Cougars will kickoff district play in their third game as they travel to face Clinton Christian Academy on Sept. 1 followed by another road contest at Sylva Bay Academy on Sept. 8. The Cougars come home for a Sept. 15 showdown with Bens Ford Academy and a Sept. 22 matchup against Claiborne Academy for homecoming.

Sept. 15 will serve as the “Pink Game” in which the Cougars will wear pink uniforms to raise awareness of multiple forms of cancer.

Rushing has used the “Pink Game” to allow his players to wear the names of a loved one affected by cancer on the backs of their jerseys because, in Rushing’s words, “everyone is affected by all cancers in one way or another.”

“We’ll have special pink T-shirts available before this game for the fans to purchase and wear to the game,” Rushing said. “I hope the Brookhaven Nation is a sea of pink in Red Stuard Field that night, but more importantly, I hope it causes community involvement all over Brookhaven.”

King’s Daughters Medical Center in Brookhaven will have a presence at the game, explained by the hospital’s Director of Marketing, David Culpepper.

“King’s Daughters Medical Center is pleased to be a part of the “Pink Game” that coach Ron Rushing and Brookhaven Academy are hosting,” said Culpepper. “Early detection and annual checkups is a vital part of diagnosing and treating all types of cancer. KDMC encourages everyone to talk to your physician about your health.”

Historical rival, Centreville Academy, will host the Cougars in a district test on Sept. 29 followed by a road game at Benton Academy, near Yazoo City, on Oct. 6.  An Oct. 13 home contest vs. Union Christian Academy, located northwest of Monroe, Louisiana is tabbed as the “Veterans Game” in which the Cougars will wear special blue digital camouflage jersey and pants. Pregame and halftime ceremonies that will recognize veterans in the Brookhaven area make this an event not to be missed.

The season ends with Oct. 20 district matchup with Amite School Center in Brookhaven.

“Our players have been working hard in anticipation of next season, numbers are up, and they are excited about the future of Cougar football,” Rushing said. “There is a winning tradition at Brookhaven Academy and we’re going to do everything we can to get back there beginning with the 2017 season.”