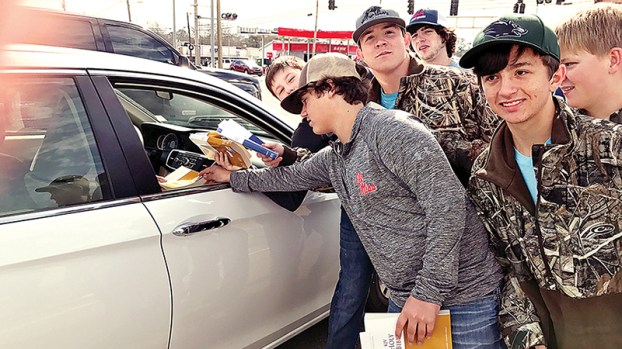 Youth pastor: ‘Man, they are on fire’

Several Baptist youth groups this weekend took to the streets of Brookhaven to spread the Gospel one Bible at time.

The 200 youth were met with both heartfelt smiles and praise as well as rude hand gestures and curses.

The latter was a new experience for the teens, who are in their third year of this particular Disciple Now mission project.

The youth from eight churches come together during the Saturday afternoon of D-Now weekend in the Bogue Chitto area and spread out around Brookhaven to give out Bibles to motorists stopped at intersections.

Each church gave out anywhere from 300 to 400 Bibles Saturday. There were King James and New International versions and some NIV New Testaments for the kids.

The youth, who are seventh- to 12th-graders,  are instructed not to take donations.

“We had people turn around,” said Caleb Bonds, youth pastor at Mt. Moriah. “We’re not after donations, we try not to take them. But some people insist.”

She said one woman Saturday stopped and came over to him after the youth wouldn’t accept her donation. Bonds said she pressed a handful of $1 bills in his hand.

“She said ‘It ain’t much but I want y’all to have it,” he said. “Another woman gave us a bag full of pennies. It was all she had but she wanted us to have it.”

Despite the grateful acceptance from most of the people they encountered, the youth also faced rejection for the first time in the three years they’ve been doing this.

“They got flipped the bird and got cussed out,” he said. “Some of the people wouldn’t make eye contact with them. Sometimes they’d say ‘no’ and put their hand up.”

He said the negative reactions stunned the young people.

“They were hurt because they didn’t understand it. They felt like they were being rejected,” he said. “They think everybody should want a Bible. They don’t understand there are people out there who don’t.”

The negativity they faced just encouraged them to do more.

“Man, they are on fire,” Bonds said. “After that first year, they came back and they’re ready.”

Bonds said the youth groups talked about their experience at the Saturday night session of the D-Now weekend.

“Most of them received a blessing,” he said. “They realize they’re sharing the Gospel with somebody. They’re hoping they’ll impact their life and they’ll come to Christ.”

He said the Mt. Moriah youth met a man who shared with them what was on his heart.

“They got to see real people with real pain,” he said. “He didn’t profess to be a Christian. He knows about God but he’s not ready to take that step.”

That had an impact on the youngsters.

“They see reality and how important it is to share the Gospel,” he said. “They’re excited at being the hands and feet of Jesus.”