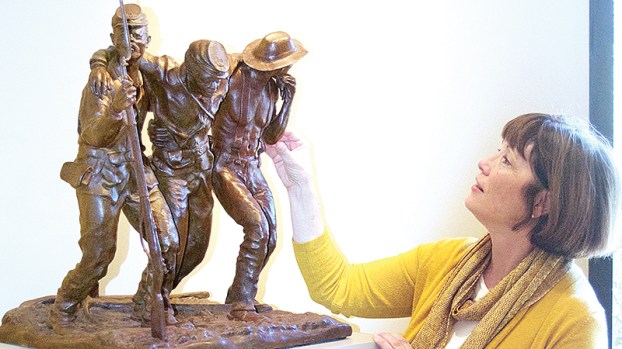 Photo by Donna Campbell/Helen Lynch, a member of the Board of Trustees for the Lincoln-Lawrence-Franklin Regional Library System, inspects a piece by artist Kim Sessums that will be moved today to the library. The piece is a maquette of the 16-foot-tall monument, “Vicksburg Campaign,” which Sessums completed in 2003 for the Vicksburg National Military Park.

Art showcases past and future

Before Brookhaven artist Kim Sessums created a larger-than-life bronze statue of African American soldiers to be erected at the Vicksburg National Military Park, he made a smaller version out of mud and raw talent.

The maquette, the sculptor’s preliminary model, was cast in bronze when Sessums cast the larger statue for Vicksburg. The small statue of two to three feet was recently purchased by the Lincoln-Lawrence-Franklin Regional Library System’s Board of Directors to add to the library’s art collection.

The public is invited to the presentation of Sessums’ African American monument Thursday at 5 p.m. at the library. Light refreshments will be served.

Guest speaker for the event is Robert Walker, former mayor of Vicksburg. Walker worked for more than 15 years to have African-Americans’ Civil War contributions recognized in the military park.

Sessums was selected unanimously from six artists to complete the Vicksburg project in 2003.

In September, Henry Ledet, director of the Lincoln-Lawrence-Franklin Regional Library System, unveiled the first piece in the collection — a bronze bust of Samuel Langhorne Clemens, an American writer known as Mark Twain. The bust, created by the late Bruce Brady, was the first real piece purchased for the library’s art collection since the Board of Trustees began their fundraising efforts over a year ago, Ledet said.

Showcasing Mississippi artists has been a goal of Ledet’s for the 40 years he’s been with the library. He wanted to add real quality art to the library for the public to enjoy, but budgets didn’t allow for it.

The library’s Board of Trustees agreed with Ledet and decided to raise money for an art collection on their own. More than $26,000 was raised to purchase art for the library, he said.

It was at the suggestion of Sessums, a Brookhaven OBGYN, that the library made that first purchase. Sessums saw the Brady Mark Twain bust at Brown’s Gallery in Jackson and discovered it was for sale at a reasonable price. The library paid $9,000 for the bronze bust, which depicts the iconic author puffing away on one of his trademark cigars.

After purchasing the Brady piece, Ledet announced plans to add to the collection, purchasing works by “people who have a great, strong connection to Brookhaven.”

One artist on his list was Dr. Sessums. And the maquette was the piece Ledet wanted.

“We kind of feel like this would be the icing on the cake, if we could add this sculpture to it,” Ledet said in February a year ago.

The original statue is located on the south side of Grant Avenue in Vicksburg and was erected by the State of Mississippi at a cost of $300,000. That moment consists of three bronze figures on a base of black African granite — two black Union soldiers and a common field hand. According to the National Park Service, the artwork shows the field hand and one soldier supporting the second soldier between them. He is wounded and represents the sacrifice in blood made by black soldiers on the field of battle during the Civil War. The field hand looks behind at a past of slavery, while the first soldier gazes toward a future of freedom secured by force of arms on the field of battle.

According to the NPS, “African-American soldiers and sailors served in the armies and navies of both the Union and Confederacy during the Civil War. By the end of the conflict, over 178,000 black soldiers saw service with the Union army, while as many as 18,000 African-Americans joined the Union navy. Service figures for the Confederate States are unknown. African-American participation in the Civil War had far-reaching effects and implications for the black servicemen themselves, their white comrades in arms, and the society of which they were struggling to become a part and gain respect.”

The smaller piece cost the library board slightly over $17,000.

“I think it crosses so many boundaries,” Ledet said of the piece last year. “That is the perfect piece for us. Kim is a really, really talented artist and he lives here in Brookhaven, less than a mile from the library. It would really be sad for us not to take advantage of having a talent of that grade here in our community. The piece that they’ve chosen in particular is meaningful because a large part of our community is African-American.”

Ledet is overjoyed to add Sessums’ piece to the library.

“Kim Sessums is one of America’s greatest living artists and he chooses to live in our great city,” he said. “It is a great honor to display one of his greatest works as an essential part of our growing art collection.”

Light refreshments will be served and library staff will be available to give tours to the public and answer questions.

The Copiah-Lincoln Community College Lady Wolves moved to 14-1 on the season and 7-0 in the MACJC South Division after... read more