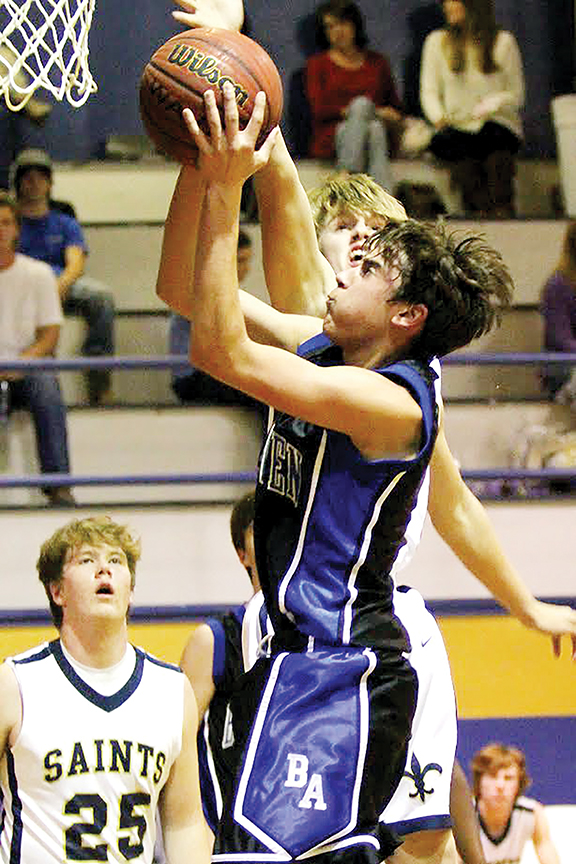 Cade Brown of Brookhaven Academy goes up in the lane for the shot in their 55-54 overtime loss to Prentiss Christian Academy. (Photo by Sherylyn Evans)

The Brookhaven Academy Cougars and Lady Cougars traveled to Jefferson Davis County to take on the PCS Saints Tuesday in non-district action. The Lady Cougars played well in a dominating 56-32 win. The Cougars faced a tougher task with the home team Saints and lost a heartbreaker in overtime by a score of 55-54.

The BA Cougars (21-9) faced a determined Prentiss Christian team that outscored the Cougars 20-10 in the final frame to push the game to overtime. The Saints ended up pulling out the win over BA by a score of 55-54.  Tate Felder led the way for BA with 16 points. Dawson Flowers and Cade Brown added 11 and 10 points, respectively. Josh Daley led PCS and all scorers with 26 points on the night.

The BA JV boys kept their focus en route to a 43-23 victory over the Saints. Brady Spring led the BA scoring attack with 11 points on the afternoon. Britton Nelson scored 10 points in support.

The BA JV Lady Cougars stayed hot by doubling up the Lady Saints by a final score of 28-14. Makayla Martin led the way for BA with 10 points.  AB Warren added seven points and Juliana Crosby had five points to round out the scoring.

BA is back in action tonight as they travel to Laurel to take on Laurel Christian for their last regular season district matchup.  JV girls get the night started with tipoff at 4 p.m.