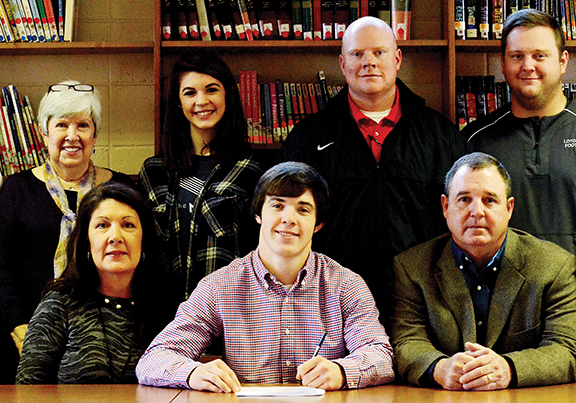 Family, friends and coaches gathered inside the library at Loyd Star High School Wednesday morning to watch Parker Flowers put the pen to paper and sign where he would continue his football career.

That decision would be to play football at Southern Arkansas University.

The former captain, quarterback and linebacker signed his letter of intent to play for the Muleriders.

“It’s a dream come true. I’ve been dreaming about this since I was little and I always wanted to play college football,” Flowers said. “I’m happy I could be at Loyd Star to do it.”

One of those watching Flowers make his commitment official was his father, David. David, a former football standout at Loyd Star, had the joy of watching both his sons, Peyton and Parker, play football at his former school. Seeing Parker sign to play college football was special for him.

“For Peyton and Parker, that was their ultimate goal to play college football,” David Flowers said. “He’s fulfilled that goal and I’m very proud of him.”

At Loyd Star, Parker Flowers was a star on both offense and defense. At quarterback, he threw for 957 yards and 10 touchdowns, also adding on 930 rushing yards and 13 touchdowns on the ground.

At linebacker, Flowers led the Hornets in tackles with 139 total tackles and 87 solo tackles.

Flowers will play linebacker at Southern Arkansas and will get the chance to play right away.

“It’s such a great community and a good place to be,” Parker Flowers said about his new school. “The coaches there are great and I felt like I needed to be a part of their program.”

At the collegiate level, Flowers will play for the Muleriders solely as a linebacker and says he hopes to play right away.

The Division II Muleriders finished this past season at 9-3 overall with two of their three losses coming by a touchdown or less.

Flowers will get to live out the dream both he and Peyton strived to achieve. The tragic death of Peyton two years ago was a moment that changed Parker, the Flowers family and the Loyd Star community. Both Parker and Peyton grew up loving the game of football and playing together.

“I know he would be congratulating me and telling me how proud he is,” Parker Flowers said of Peyton. “I know he’s watching.”