She and her husband, Frank, grew them at Brookhaven Nurseries for years, so they were ineligible to compete in the annual camellia show. Still they participated in the Brookhaven Camellia Society and often donated blooms to the organization to use as prizes.

The 54th annual camellia show, to be held Saturday at the Brookhaven Recreational Center, is dedicated to Kay Burns and Howard Peters for their support of the organization.

Burns died in May and Peters died in December.

Homer Richardson, who’s been with the society for about 25 years, would show up at the Burnses’ nursery when it was time to get ready for the show.

“I’d say, ‘OK, what do you need this time? What kind of camellias do you need? I’ve got some pretty ones,” Frank Burns said.

“And he did,” Richardson said.

Burns’ daughter, Jill Logan, said her mother would have enjoyed the show. “Mother loved them because they were so beautiful,” she said. “And it’s the only thing blooming in the winter that you can cut and bring inside.”

Since the nursery is closed and Burns is a resident at BeeHive, he won’t be able to donate to the society this year. But instead, he plans to purchase several camellias from the vendors at the show and plant them at the assisted living facility.

“I’ll have to move some crape myrtles,” he said, smiling.

The Brookhaven Camellia Show is one of just two in the state — the other is in Jackson — and attracts vendors, competitors and judges from all over, Richardson said.

This year, the Camellia Society is featuring a new category at the show strictly for  Lincoln County students in grades K through 12. “Any student can enter a bloom,” Richardson said. “Ideally, they need to know the name of the camellia.”

Logan was excited at that news. “That’s great,” she said. “The love of these flowers won’t be lost with this generation.”

Richardson said he expects 800 to 1,200 blooms to be presented for judging at the show.

Camellias are a hardy flower that grows best in acid soil with filtered sunlight and well-drained soil. They thrive in southern temperatures. “Everybody has a camellia in their yard,” Burns said. “If you see anything blooming November to March, it’s probably a camellia.”

The 54th annual Camellia Show will be Saturday from 2 to 5 p.m. at Brookhaven Recreational Center, 689 Hwy. 51 North. The public is invited to see the flowers after judging is complete. Vendors will be on-site with camellia plants available for sale.

Competition is open to all who grow camellias for pleasure and is not restricted to club members.

Those with unknown blooms can bring a cutting to the show for possible identification by judges.

“About half of them that come in are identified,” he said.

The Brookhaven Camellia Society meets at 6:30 p.m. on the second Tuesday of the month September through April. 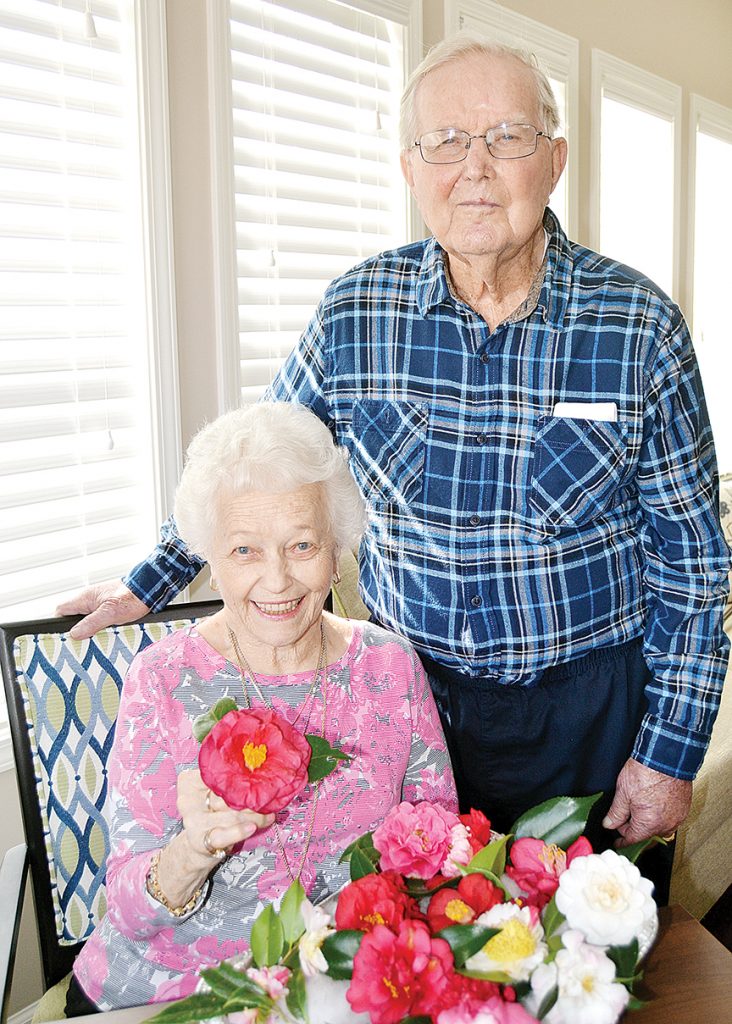 Photo by Donna Campbell/Betty Peters (left) and Frank Burns enjoy the fragrance of fresh-cut camellias in the sunroom at BeeHive Homes in Brookhaven. Peters’ late husband, Howard, and Burns’ late wife, Kay, will be honored Saturday at the 54th annual Camellia Show hosted by the Brookhaven Camellia Society at the Brookhaven Recreational Center. The event is open to the public after the judging.

The race is on in Brookhaven. Dozens of students from Bogue Chitto Attendance Center scattered around Brookhaven Thursday to participate... read more