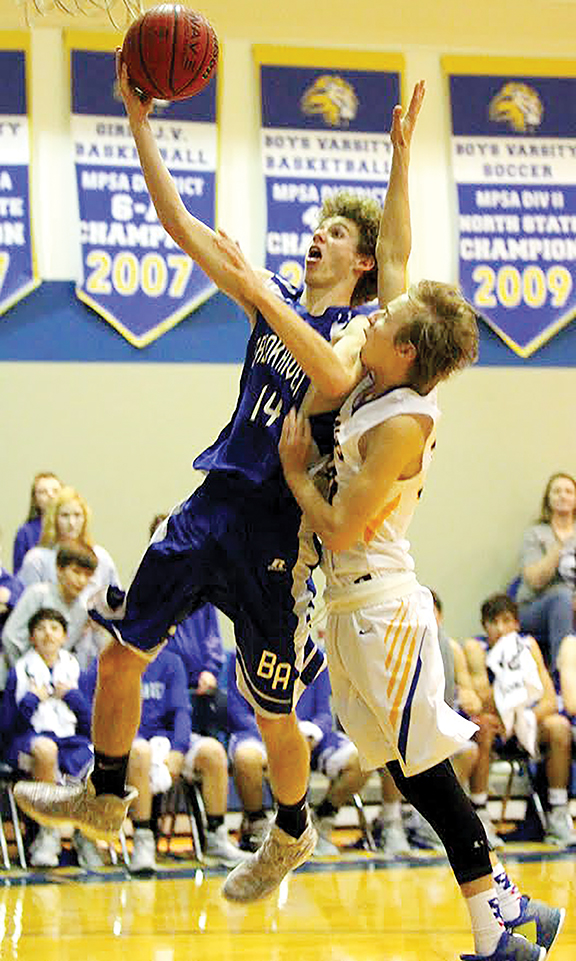 Dylan Winborne goes up for the layup Thursday night in their win over Laurel Christian. (Photo by Sherylyn Evans)

The Brookhaven Academy Cougars and Lady Cougars were back on the road Thursday afternoon to take on the Lions of Laurel Christian. The Lady Cougars played a well-rounded game in a dominating 53-25 win. The Cougars went back and forth with the Lions for three quarters before putting the game away by a score of 58-40.

The BA Cougars (22-9) used a 22-10 scoring run in the fourth quarter to end seesaw first three quarters against Laurel Christian on their way to a 58-40 win. Senior Dylan Winborne led the way for the Cougars with a 19-point performance. Ethan Nations and Luke Jackson each scored nine points to round out the leaders for Brookhaven Academy. Karston Nobles led Laurel Christian with 13 points on the night.

The BA Lady Cougars (21-10) jumped out to an early 26-8 first quarter lead and held the Lady Lions in check the rest of the way, as they picked up the 53-25 win. Jana Case led BA and all scorers with 16 points for the game. Sissy Byrd added 10 points while McKinley Evans, Cameron Watson and Cassie White each had six points. Lauren Looper led the Lady Lions with six points on the night.

The BA JV boys dominated from start to finish against the Lions by a score of 57-21 as they tune up for their district tournament on Saturday. Brady Spring led the BA scoring attack with 14 points. Britton Nelson scored 13 points in support.

The BA Cougars and Lady Cougars will be back in action as they host the District IV AAA tournament to be held at Brookhaven Academy February 8-11.

The Wolves of Copiah-Lincoln were unable to overcome No. 10 Jones County Thursday night as the Bobcats rallied to a... read more