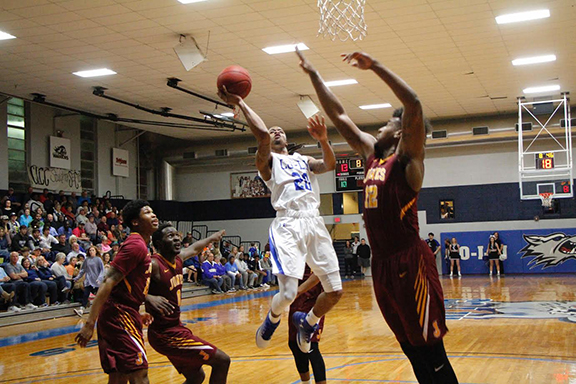 The Wolves of Copiah-Lincoln were unable to overcome No. 10 Jones County Thursday night as the Bobcats rallied to a 73-64 victory. The loss gives the Wolves a 9-8 record on the season and a 3-5 in the always-tough MACJC South Division. The Wolves take the floor again Monday, as the Wolves travel to Mississippi Gulf Coast. The game is set for a 7:30 tip and can heard live at colinathletics.com or WMJU 104.3 FM in Brookhaven.

“I was proud of the way we played on the defensive side of the floor,” said head coach Kenny Bizot. “We struggled on offense, but we did a lot better job of moving the basketball tonight so there are positives.”

The Bobcats of JCJC took an early lead over Co-Lin in the opening possessions and stretched that lead to 10 with 10:58 remaining in the first half. Both teams began to trade baskets late in the half that resulted in JCJC taking the 10-point lead into the half.

Youry White led the Wolves at the start of the second half on a quick run that cut Jones’ lead to just one. White netted six quick points and made key rebounds on the defense end. Once again the game became back and forth as JCJC held onto a small lead until the final five minutes.

In the final minutes the Bobcats pulled away and extended their lead to as many as 12 with just 1:26 left in the contest.

Bruce Stevens led the Bobcats in both scoring and rebounds with 21 and 12 respectively. Rickey Holden added 15 points for JCJC, while Leito Halloway netted 10.

The Co-Lin Lady Wolves lost in a barnburner Thursday night that ended with a buzzer beater. No. 17 Jones County landed a three-pointer from the right wing of the floor to lift the Lady Bobcats to a 68-66 victory in in front of a rambunctious crowd in Mullen Gymnasium. The loss moves the Lady Wolves to 14-2 on the season and 7-1 in the MACJC South Division. Co-Lin is back in action Monday, as the Lady Wolves travel to Perkinston to take on Mississippi Gulf Coast. The game is set for 5:30 p.m. and can be heard live at colinathletics.com or WMJU 104.3 FM in Brookhaven.

“There were other opportunities in the game that we could have stopped them by just grabbing rebounds,” said head coach Gwyn Young. “It was just one of those games that both teams were battling, but unfortunately we just couldn’t execute on the offensive end, especially early in the game.”

In the opening half, the Lady Wolves shot only 32 percent, a stark contrast from their performance earlier in the week. Co-Lin appeared to be out of sync throughout the first and second quarter, but continued to battle. The Lady Bobcats extended their lead to seven, the largest of the half, with 7:29 remaining.

Co-Lin found a spark in the final three minutes of play and went on a 10-2 run that gave the Lady Wolves their first lead of the game, 28-27. JCJC responded quickly and netted back-to-back shots that gave the Lady Bobcats a 32-28 lead entering the locker room.

The second half saw back and forth action as both teams began to find the basket. The Lady Wolves fought throughout the third quarter and retook the lead, 42-41 with 2:40 remaining. The lead continued to exchange hands as the quarter wound down with the Lady Bobcat’s Tatyana Lofton netting a three-pointer at the buzzer to give JCJC a 51-49 lead.

In the fourth quarter the lead changed six times as both teams’ offensives were firing on all cylinders.

With just 2:06 remaining in the contest JCJC stretched their lead to six after a three-pointer. Co-Lin answered with three a 7-0 run led by freshman Brittany Rose. The run gave the Lady Wolves a one-point lead with just 26 seconds remaining.

JCJC regained the lead with nine seconds left after a layup in the paint. The bucket gave the Lady Bobcats a 65-64 lead. Co-Lin’s Brittany Rose was fouled on the other end of the floor and knocked down both free throws to give Co-Lin a one-point lead with just three seconds remaining. Jones advanced the ball to half court with a timeout and Alexis Tolefree hit a three-point basket as time expired to give the Lady Bobcats a 68-66 victory.

Myyah West led the Lady Bobcats with 19 points and 13 rebounds. Alexis Tolefree, finished with 15 points and seven rebounds, while Tatyana Loften had 11 points.

The long wait is almost over. We are now two days away from the last and biggest football game of... read more