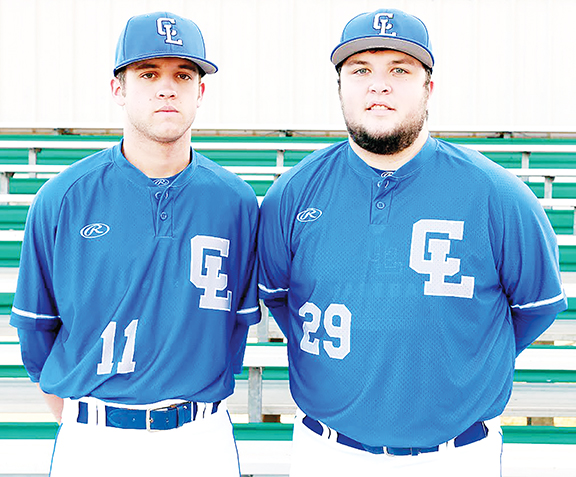 Sophomore pitcher Steven Ginn (11) and manager Lane Rogers (29) look to start the season strong for Co-Lin baseball as they take on Mineral Area Community College on Saturday to start the 2017 season.

Co-Lin baseball looks to be aggressive in 2017

The 2017 Copiah-Lincoln Wolves enter baseball play with the goal of fast-paced, aggressive play. After a season of both highs and lows, fourth year head coach Clay Smith has high hopes for this year’s squad.

“We are going to be fast, aggressive, and do everything we can to get into scoring position as quickly as possible,” said Smith. “We have 20 freshman who are very energetic and love the game, so I expect this year to be fun.”

Though having a young team can prove challenging, the Wolves are prepared to face any obstacle with confidence.

Sophomore Tyler McLeod returns to the infield to provide leadership after playing in 35 contests and spending time at nearly every infield role last season. McLeod, a Wesson native, finished the season batting .315.  Joining McLeod is sophomore first baseman Kody Smith. Smith, a Lawrence County High School graduate, saw a great deal of action as a freshman and finished the season with 10 RBIs. With an abundance of talented freshman on the roster, the starting lineup has not been finalized.

Hayden White, a freshman from Madison, looks to see time in a shortstop role, while Austin O’Flynn, an Oak Grove graduate, and Reggie Conner, a North Forest High School product, can both expect time at third base. Other freshman infielders include Blake Estabrook of Terry, Kyle Whittington of Perkinston, Jaylyn Williams of Greenville, and Tyler Vroman of Vicksburg.

Matthew Mordecai, a sophomore from Madison, led the Wolves last season in the batter’s box with a .353 batting average and a team-high 12 doubles. The Madison Central graduate had a .549 slugging percentage and came across the plate 23 times. The impressive season landed Mordecai MACJC All-State Second Team honors. Mordecai returns to centerfield as an anchor in both the field and at the plate for the Wolves in 2017.

Several freshmen will have an opportunity to see action in outfield roles. Connor Wilkinson, a Warren Central graduate, Chandler Dillard of Madison, and Tyler Etheridge of Osyka, are potential starters.

Behind the plate, J.T. Wright returns for his sophomore campaign after seeing action in 30 games last season. Wright, a Laurel native, is a talented catcher with phenomenal arm strength. Joining Wright is freshman CJ Estave, of Franklinton, La. Estave provides the Wolves with a solid bat and will likely be in the heart of the lineup even when he is gearing up behind the plate. Reed Taylor was lost to graduation.

After losing a host of sophomores last season, the Co-Lin bullpen will mostly fill with freshmen in 2017. Ryan Cullop returns for his sophomore season after throwing 17.2 innings and nine strikeouts last year. The Hattiesburg native has a sidearm delivery and will likely see time on the mound as a closer or make an appearance to get the team out of an inning.

Joining Cullop in the sophomore ranks in Steven Ginn. While not a hard thrower, Ginn, a Bogue Chitto graduate, has movement, and is rarely hit. Ginn threw 16 innings last year and recorded eight strikeouts.

New to the pitching staff in 2017 are Josh Stephens of Monticello, Miss., Gabe Smith of Natchez, Miss., Jordan Bowden of Jackson, Hunter Fortenberry of Pearl, Zach James of Madison, Trammell Martin of Madison, Christian Day of Natchez, and Blake Sigrest of Hammond, La. These players provide the Wolves with depth that is desperately needed in a pitching staff.

“We will have seven or eight guys that throw most of our innings,” said Smith. “But you need to have more in the bullpen depending on different scenarios in the game.”

At the next level, former Wolf Adrian Brown will be suiting up for his senior year at William Carey, while Shane Brown, a senior, and Austin Douglas, a junior, will play the 2017 season with the Belhaven University Blazers. Miles Thomas will suit up for the UT-Tyler Patriots for his junior year.

Fourth year head coach Clay Smith looks to continue to instill confidence and character in his players heading into the 2017 season. The former Southern Miss and Belhaven assistant continues to improve Co-Lin’s facilities to help lift the Wolves to the top of MACJC baseball.

Hopes are high for the Wolves in 2017. With a host of freshmen players who bring new life and energy to the squad, and a core group of sophomores who provide leadership, the Wolves have talent throughout the roster. Combining this talent with an aggressive play style sets the stage for exciting baseball at Sullivan Field.

Co-Lin will start the 2017 season at home against Mineral Area CC Saturday.