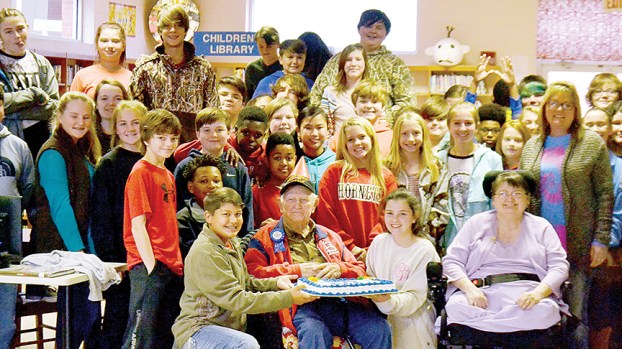 Julius Vaughan turns 95 today and for most of those years he’s been known as Peck.

Vaughan is a staple at Loyd Star Attendance Center where two of his children work. He’s a regular guest in Michelle Case’s sixth-grade English class, bringing “The Red Fern Grows” to life for them with his stories and anecdotes from The Great Depression. He was 7 years old when that hard time started and almost a man when it was finally over.

“In 1929, the United States went broke,” Vaughan tells them.

His daughter, Chris Maddox, a bookkeeper at the school, remembers his stories. “When The Great Depression hit, people in this area were so poor they didn’t realize it,” she said. “They just kept living how they knew how to live.”

On Friday, Case’s students had a surprise for the man they’ve grown to love.

As Vaughan tapped his cane and made his way steadily to the double-glass doors of the school library, the sixth-graders stood and readied to welcome him. When he stepped inside, they yelled, “Surprise!” and began to sing “Happy Birthday” to him. Vaughan, all smiles, said this was the first surprise party he’d ever had.

Vaughan first attended Friendship school, then Loyd Star beginning in 1936, when the two schools were consolidated. The oldest Loyd Star school building burned down, and students and teachers held class in tents set up on the hill behind the current school building — the third iteration of Loyd Star Attendance Center. Vaughan said he remembers all this very well.

Another memory he has is of students playing “rabbits and dogs” among the tall pines that grew behind the agriculture building, the only building remaining of the older school. Kids chased each other through the trees and over barbed wire in a game that would probably not be permitted in school today, he said.

Vaughan taught junior high classes and coached high school boys’ track at Loyd Star from 1953-1960. Before that, he’d been a carpenter, and afterward he sold burial insurance.

The carpentry skills have been put to use for a long time to help plan and build wheelchair ramps for those who need them. What started as a project by the men’s Brotherhood group of Macedonia Baptist Church blossomed into an undertaking by the Lincoln County Baptist Association, involving men’s groups from several area Baptist churches.

Recipients buy the materials, or make a donation, and Vaughan’s group takes care of the rest.

That has translated into 214 wheelchair ramps planned, built and installed from Osyka to Crystal Springs. The ramps are custom built to the needs of each recipient.

One such recipient is Frances Newell, who is Case’s mother. Newell lost both legs and is wheelchair bound, so a ramp was a necessity. Vaughan and his group were happy to be able to help. “His motto is he’s going to work until the Lord calls him home,” Maddox said, “and he will.”

Johnny Newell is appreciative of what Vaughan has done for his wife. “When we thanked him for what he’d done for us,” Newell said, “he said, ‘What I’m doing is to the glory of the Lord.’”

Johnny Newell is a former student of Vaughan’s. He said he still remembers things he learned in the teacher’s seventh-grade Mississippi history class in that final year Vaughan taught. For example, he remembers Yazoo County is the largest in the state by square miles. “I learned that in your class,” Newell said, pointing a finger at Vaughan and smiling.

After Vaughan left teaching, he went to work for Brookhaven Funeral Home. He stayed with them from 1960 until 2004 — nearly 50 years — until he was asked in 2004 to work for a new funeral home. He still works for Riverwood Family Funeral Service today. “Well, I’m still on the payroll,” said Vaughan. He is at every funeral he can attend, and the funeral home has named a suite “The Vaughan Suite” in his honor.

“They said as long as I’m living, they’ll keep me on,” Vaughan said.