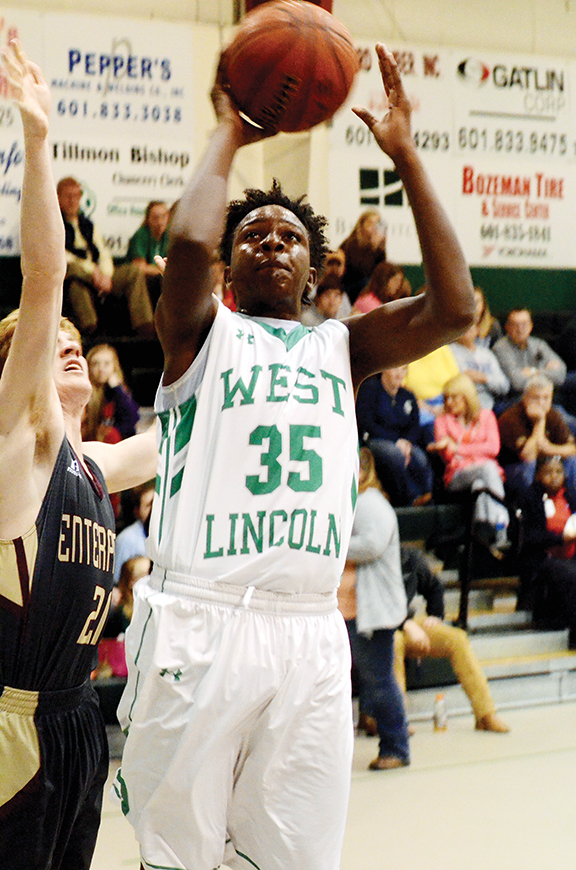 In the final matchup between the two Lincoln County rivals this season, it was the Bears and Lady Bears of West Lincoln that came out on top against Enterprise Friday night at West Lincoln High school.

Taking a three-point lead at the end of the first quarter, the West Lincoln Bears used a dominant second quarter to take a commanding lead on their way to the 45-33 win over Enterprise. The win moves the Bears to 10-13 overall on the season and drops Enterprise to 11-11.

“I thought our defense was really good tonight. We took them out of what they wanted to do,” West Lincoln head coach Lane Young said. “Ledarrius Jones did a great job of guarding Dwayne (Pendleton) tonight. He killed us the first two times.”

The strategy of taking Enterprise senior guard Dwayne Pendleton out of the game worked as Pendleton only scored six points on the night.

It wasn’t just the defense on Pendleton that won the game, but the defense played great in all four quarters for West Lincoln. Taking a 15-12 lead after the first quarter, West Lincoln held Enterprise to only one point in the second quarter and took a commanding 26-13 going into halftime.

Enterprise would come out with more fire on offense in the second half, keeping pace with West Lincoln, but the Bears took a 36-24 lead heading into the fourth quarter.

The Yellowjackets would make things interesting in the fourth quarter as they opened the final frame of play on a 7-0 run to make it 36-31. The defense for West Lincoln ramped their play up since the run and took home the district victory 45-33.

“We did a good job at the end making key shots under the goal,” Young said. “I can’t say enough about our defense tonight, especially towards the end.”

Enterprise came into the matchup Friday off a huge district win against Loyd Star Tuesday, but fell short in an important game for the Yellowjackets.

“We had a big win against Loyd Star Tuesday and we just came out flat tonight,” Enterprise head coach Shane Adams said. “All credit goes to West Lincoln. They played great, but it was an off night all around for us.”

Junior point guard Ledarrius Jones took on the responsibility of guarding Pendleton and shut him down for the entire game. Jones was also second on the team in scoring with 11 points. Junior forward Donterrius Taylor led the Bears in scoring with 13 points on the night.

Defense was the theme all night for West Lincoln and the Lady Bears swarmed against the Enterprise Lady Jackets and dominated for the 45-28 win.

The victory moves West Lincoln to 10-13 overall and the loss dropped Enterprise to 14-8 overall on the season.

It was a complete game for West Lincoln and Lane Young liked what he saw from his team.

“I thought we did a good job defensively all night and we rebounded the ball really well,” Young said. “We missed a lot of open shots the first half which we made in the second half.

It was a competitive first half with Enterprise holding a 19-18 lead going into the half. When the two teams came back out on the court for the second half, it seemed to be all West Lincoln.

The Lady Bears exploded on offense in the third quarter and took a 35-27 lead heading into the fourth.

The defense ended the game on a strong note, holding Enterprise to only one point in the final quarter, taking home the 45-28 win.

Senior guard Courtney Greer led Enterprise in scoring with 16 points for the game.

The Brookhaven Academy Cougars and Lady Cougars were back on the road Thursday afternoon to take on the Lions of... read more