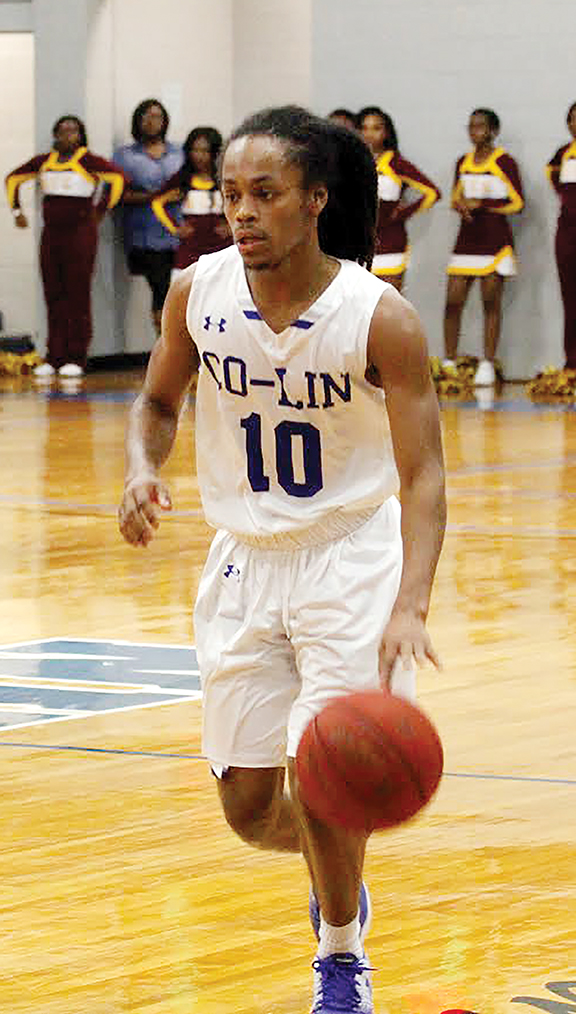 Jonathan "Biscuit" Floyd (10) led the Wolves in the loss with 21 points and six assists in a game earlier this season. (Photo by Lucas Calvert)

PERKINSTON – The Copiah-Lincoln Community College Wolves suffered a 74-63 loss Monday night to the Bulldogs of Mississippi Gulf Coast. The loss moves the Wolves to 9-9 on the season and 3-6 in the MACJC South Division. Co-Lin takes the floor again Thursday as the Wolves travel to Utica to face Hinds.

“We just could not shoot the basketball tonight,” said head coach Kenny Bizot. “We weren’t scoring consistently, and we didn’t have a flow to our offensive. That’s something we have to have with this team…we just weren’t ourselves.”

In the first half the Wolves struggled finding points, as three-pointers were not falling. Co-Lin found some success in driving to the basket, but the opportunities were slim. After trailing by six early, the Wolves cut Gulf Coast’s lead to just one midway through the half. The Bulldogs scored three straight to regain a seven-point lead just one minute later. Co-Lin refused to stop battling and once again cut into the lead before tying the game at 29 with 3:24 remaining. Gulf Coast took a six-point lead into intermission.

The Bulldogs continued to hit three-pointers throughout the second half of play as Gulf Coast stretched their lead to as many as 22. Co-Lin was simply unable to overcome the impressive shooting.

Jonathan Floyd led Co-Lin with 15 points, while Anthony Jones came of the bench and scored 14 points. Youry White recorded a double-double on the night 11 points and 13 rebounds. Lamarcus Lee finished with seven points and six rebounds.

PERKINSTON – The Lady Wolves overcame a slow third quarter Monday night in a 75-62 victory over Mississippi Gulf Coast. The win moves the Lady Wolves to 15-2 on the year and 8-1 in the MACJC South Division. Co-Lin is back in action Thursday as the Lady Wolves travel to Utica to take the Hinds Lady Eagles.

“They made a good run us in the second half,” said head coach Gwyn Young. “We weren’t putting enough pressure on them on defense and we were making some pretty bad fouls…we just didn’t execute. It wasn’t pretty, but I’m glad we got the win.”

The Lady Wolves came out firing Monday night as the opened the game with a 15-2 run led by freshman Alexus Holt. Holt netted Co-Lin’s first eight points in two minutes of action. This lead continued to grow throughout the first quarter and stretched to 20 with 42 seconds remaining in the first quarter.

The hot hand for Co-Lin slowed down in the second quarter as the Lady Wolves shooting began to falter. The Lady Wolves still maintained an impressive lead as Young played many players from the bench. The Lady Bulldogs cut the lead to just 12 mid way through the quarter but were unable to capitalize on the 8-0 run as Co-Lin took a 40-26 lead into the locker room.

The third quarter saw few baskets for the Lady Wolves as the hot shooting streak seamed to disappear. The Lady Bulldogs did not take advantage of Co-Lin’s offensive troubles until late in the third period when a 9-0 run cut the Lady Wolves lead to just two. Co-Lin scored just 11 points in the quarter.

Co-Lin regained their rhythm in the fourth and began to pour in baskets led by freshman Brittany Rose. Co-Lin was able to drive into the paint throughout the quarter and pull the game out of reach of the Lady Bulldogs.

Keiara Williams led Gulf Coast with 14 points, while Jordana Jolley added another 13. J’nitra Ratliff and Shaniqua Tobias rounded out the top scorers with 10 points each.

Co-Lin baseball looks to be aggressive in 2017

The 2017 Copiah-Lincoln Wolves enter baseball play with the goal of fast-paced, aggressive play. After a season of both highs... read more