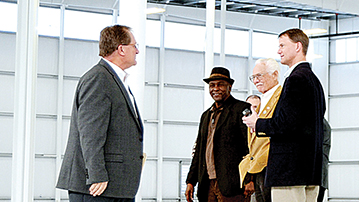 One of the members of the Lincoln County Board of Supervisors said people in his district aren’t as thrilled as those who attended a recent ribbon-cutting ceremony for the spec building at the Linbrook Business Park.

District 1 Supervisor Jerry Wilson said his constituents have complained that the money spent to construct the building could have been been put to a better use.

The 50,000-square-foot building is the only structure in the otherwise vacant 400-acre park.

Supervisors, Brookhaven Board of Aldermen and the Brookhaven-Lincoln County Economic Development Alliance supported the investment to bring businesses and industry to Linbrook.

The county and city years ago put up $2.2 million each, along with the Chamber’s $500,000 and a $1.1 million grant from the Mississippi Development Authority to build the park.

The Alliance, which governs Linbrook, partnered with industrial development company Agracel and Southwest MS Electric Power to construct a spec building which can quadruple in size to 200,000 square feet if needed.

The dirt work has already been completed for a 150,000-square-foot expansion.

Lincoln County Chancery Clerk Tillmon Bishop, the secretary of the board, said the spec building has the potential to bring in jobs to the county when a tenant is found and that Wilson’s District 1 residents may benefit from that.

“When my bosses call, I want to bring it up. And I brought it up,” Wilson said.

Bishop compared the building to eggs at a grocery story, saying that if he goes to buy eggs at the store and they don’t have any, he can’t get eggs. It’s the same with the building, he said. If a potential tenant considers Lincoln County as a possible location for a business, but they don’t have a building available to move in to, they keep looking, he explained.

“I’m just praying that the Lord will bless us and we get some business in,” he said.

More on roads and bridges

President Bobby Watts, representing District 2, wants Tom King to come explain to him why he doesn’t have enough money to fix roads and bridges.

King is in his first term as transportation commissioner for the southern district, joining Mike Taggert in the northern district and Dick Hall in the central district.

Watts said he “wants to get him down here” after the conversation turned to the continued failure of a gas tax increase to fund county road and bridge maintenance.

“What are you going to ask him when he gets here?” District 5 Supervisor Doug Falvey said.

“How to get some money for roads in Lincoln County,” Watts replied.

County engineer Ryan Holmes pointed out to Watts that King is a commissioner at the Mississippi Department of Transportation, which caused Falvey to add, “He’s not going to take it away from MDOT.”

King has said the state’s roads and bridges have reached a crisis level and wants the Legislature’s help to fix them. He has complained that the Legislature wants to cut the transportation budget by $50 million, but MDOT needs about $3.2 billion over the next eight years to complete projects.

“Safety is MDOT’s No. 1 priority,” he said during a press conference last week in Hattiesburg. “But with the current level of funding, the state highway system will only continue to be neglected.”

King is urging the Legislature to consider raising the fuel tax or stepping up compliance of the state’s internet sales tax. The Legislature already is considering these measures, but King wants legislators to earmark money for transportation.

And Watts wants some earmarked for Lincoln County.

• The board will meet Thursday at 10 a.m. to discuss the January claims docket. The board will also meet for its regularly scheduled meeting Tuesday, Feb. 21, since Monday, Feb. 20, is Presidents’ Day and a federal and state holiday.

• The board went into executive session for 37 minutes to discuss possible litigation. The board took no action upon returning to the open meeting.

Co-Lin ends soccer programs: Athletes affected will be eligible for other scholarships

Copiah-Lincoln Community College will suspend the men and women’s soccer programs indefinitely to save money. The Co-Lin Board of Trustees... read more