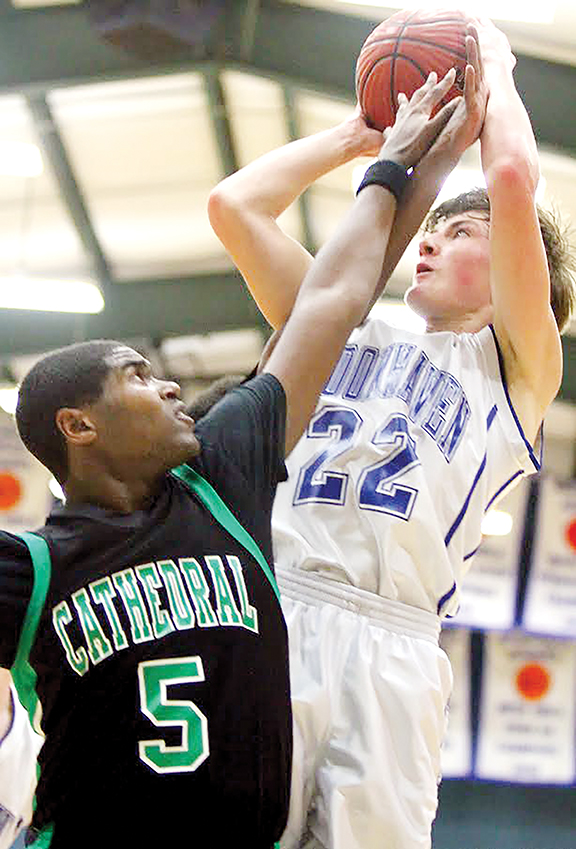 Tate Felder of BA (22) shoots with a hand in his face in the Cougars’ 56-42 tournament win over Natchez Cathedral. (Photo by Sherylyn Evans)

The Brookhaven Academy Cougars and Lady Cougars began the district tournament Tuesday afternoon with hopes of punching their ticket in qualifying games to next week’s South State Tournament. The Cougars did their part and won the opening game against the Natchez Cathedral Green Wave by a score of 56-42. The Lady Cougars, however, came up short in their attempt to beat Simpson Academy for a third time this season falling 58-49.

The BA Cougars (23-10) used a 16-4 run in the second quarter to put space between them and the Cathedral Green Wave to capture their 56-42 district tournament win. Ethan Nations led the Cougars in scoring with 19 points and nine rebounds. Tate Felder and Luke Jackson each had 10 points while Dawson Flowers chipped in nine points and reeled in 12 rebounds. Derrion Batieste had 18 points to lead the Green Wave.

With the win, the Brookhaven Academy Cougars advance to the semifinals of the District IV AAA tournament and will face Simpson Academy at home Friday night. Tipoff is set for 7:45 p.m. at John R. Gray gymnasium.

The BA Lady Cougars (22-11) trailed Simpson by three points going into the fourth quarter of play, but saw their hopes of staying alive in the District IV AAA tournament fade quickly. Simpson Academy outscored BA 15-9 in the final frame en route to the 58-49 and ended the 2016-17 season for the Lady Cougars.

The Wesson Cobras fought until the very end Tuesday night against Port Gibson, but fell short on senior night by... read more