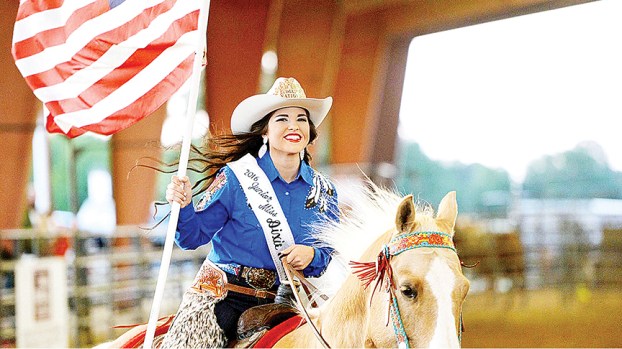 Photo submitted/Makenzie Richardson of Lincoln County takes the reins as the reigning Miss Dixie National. The teen has been running barrels since she was 3 years old.

When she was just 3 years old, Makenzie Richardson raced her pony around the barrels, copying her mother’s moves.

That was 15 years ago, and now the Lincoln County teenager has her eyes set on a bigger prize.

Richardson, 18, who was recently crowned as Miss Dixie National, wants to be a rodeo queen. That means she’s planning to wear the Miss Rodeo America crown someday.

But that goal has to wait at least four years until the Prentiss Christian senior can get her degree.

“I want to make sure college comes first,” she said.

Richardson, the daughter of Mike and Leigh Ann Richardson, grew up around Fair River with an older brother, Dakota, and a family that rodeoed.

She said her mother sacrificed and her father worked hard so that their kids could enjoy the rodeo life with their family.

“I was just born into the family that did it,” she said. “I’ve been blessed.”

She rode her pony, Frosty, around the barrels at 3. “My mom would lead me in and I’ve been doing it ever since then,” she said.

She started team roping at age 11.

Her horses — the family has eight all together — are Bodie and Jethro for barrel racing and Sugar Bar for roping.

Most of her time is spent at a rodeo somewhere. “It’s what I’ve known my whole life. I don’t think I have gone a whole week without riding my horse,” she said. “It’s my life. I ride every day after school. I’m gone every weekend (at rodeos) and sometimes during the week.”

When she’s not in the arena she’s in the gym. She works out every day, running and lifting weights.

“I’m going to school to be a dietician and study exercise physiology and open up my own gym,” she said.

She plans to attend Copiah-Lincoln Community College “so I can still ride my horses,” she said.

Then she said she wants to enroll in Southern Miss in Hattiesburg, “so I won’t be far from home and can still ride my horses.”

The pageant is divided into three phases — horsemanship, interview and modeling. She won the horsemanship portion of the pageant and placed well in the other two areas.

Winning means a lot to the busy senior.

“It’s more than just a crown. I mean, I love the crown, but it’s very important for me to be a role model to those around me,” she said.

As Miss Dixie National, Richardson will participate in many of the Dixie National events, such as the parade Saturday morning in Jackson.

After college, Richardson wants to compete in the Miss Rodeo Mississippi pageant and then go on to Miss Rodeo America.

Every February, members of the Boys and Girls Club of Lincoln County become radio stars for Black History Month. For... read more