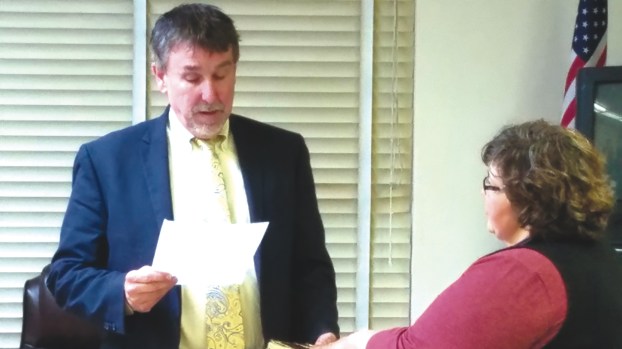 Photo by Donna Campbell/Lincoln County School District Superintendent Mickey Myers (left) swears in Joanna Posey as the District 5 representative to the school board. Posey was appointed by the board last month to fill the expired six-year term of her father-in-law, Michael Posey. The District 5 seat will be up for election in 2018. The appointment will get the election for the District 5 seat back on track.

Sawyer was approved by a unanimous vote of the Lincoln County School Board Monday night at the recommendation of Principal John Shows.

Sawyer is replacing Charlie Jackson, who resigned in early January but plans to stay on through May. Jackson started at West Lincoln in June 2015. He replaced Willie Brumfield, who took a head coaching position at Sumrall High School after three seasons at West Lincoln.

The meeting started with a swearing-in ceremony for the board’s newest member, Joanna Posey, who is representing District 5.

Posey was appointed to the board in January at the recommendation of her father-in-law, Michael Posey. He had served on the school board representing District 5 for two six-year terms.

The board accepting applications to fill Posey’s seat until an election can be conducted in November 2018. At some point over the years, Lincoln County’s election rotation got out of sync with the rest of the state when it came to terms and elections of school board members.

The District 5 election should have been held in 2014, but Michael Posey was elected the second time in 2010, and his term started in 2011. Posey’s term expired at the end of 2016, but if an election was held for District 5 in November 2016, that seat would remain out of sync with the rest of the state.

The board’s attorney, Jim Keith of Adams and Reece in Ridgeland, suggested board members schedule a work session to brainstorm long-range plans for the district.

Keith told them they should look at ways to compete with other educational avenues such as private school and home-school programs or face decreased enrollment, which also means a loss of revenue. “We’ve got to have an excellent school system,” Keith said.

He offered the board the use of his firm’s conference room in Ridgeland as well as providing them lunch.

Keith suggested board members schedule the work session on a Saturday. He also suggested that if the meeting is held in Ridgeland, the public isn’t likely to attend.

Work sessions are open to the public, but no action can be taken.

The board tabled the issue until it could discuss it further at the next meeting, which will be Tuesday, Feb. 21, at 5 p.m.

Myers told The Daily Leader Tuesday the work session would be “a retreat of sorts” for board members. “Many times, school districts do these things outside the board room where we meet all the time,” he said.

He said the board has not had a work session since he’s been superintendent. Myers came on in January 2016.

When she was just 3 years old, Makenzie Richardson raced her pony around the barrels, copying her mother’s moves. That... read more