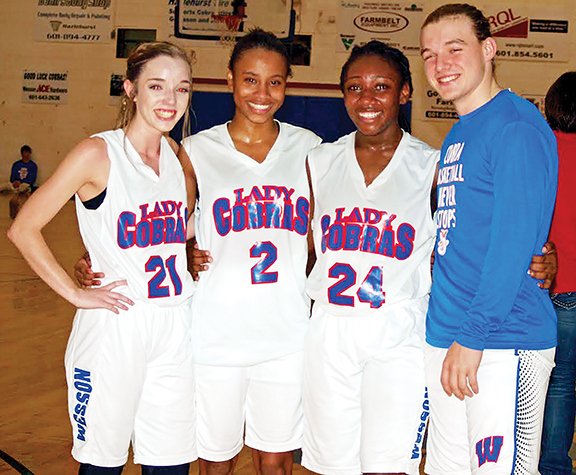 The Wesson Cobras fought until the very end Tuesday night against Port Gibson, but fell short on senior night by a final score of 77-59.  The loss drops the Cobras to 11-12 overall and 2-7 in district play

Wesson scored the first points of the game Tuesday night, giving the Cobras the lead early, but the Blue Wave had the advantage the rest of the quarter and held on to rheir lead and extended it late, picking up the win.

The top scorer for Wesson was senior guard Will Hulon with 13 points on the night. Sophomore guard JD Allen was next in line in scoring with 12 points and sophomore guard Shemar Dickerson, freshman center Kenner Bizot and sophomore forward Jontavius Smith all had eight points each. Smith was the top rebounder with seven and added on two steals. Allen and Brian Thomas had five rebounds each and Allen had two steals. Hulon and Bizot had four steals and four rebounds each. The Cobras shot 9-of-18 from the free throw line.

Port Gibson’s James White was the top scorer on the night with 20 points and four steals. Demarcus Johnson was next in scoring for the Blue Wave with 14 points and nine rebounds and Michael Morris followed up with 13 points, six rebounds and two steals. Port Gibson didn’t get to the free throw line often, but made each trip count, converting 8-of-12 attempts.

The game started with the Lady Cobras taking the lead at the end of the first quarter with a score of 14-8. Port Gibson quickly came back strong the following quarter with junior guard Nakendra Owens hitting several three-pointers to put the Lady Wave up 26-18 at halftime.

After the half, Port Gibson held their lead and fought off the Lady Cobras for the win. The loss drops the Wesson Cobras to 2-18 overall and 0-7 in district play.

The top scorer for Wesson was senior guard Aurianna Vaughn and added on 13 rebounds as well on the night. Senior guard Alashya Vaughn chipped in with seven points, 10 rebounds and three steals for the Lady Cobras and junior Jamiya Christmas and freshman guard Shelbi Maxwell each had five points. Christmas had five rebounds and two steals and Maxwell added on three rebounds as well. The Lady Cobras shot 9-of-21 from the free throw line.

TyKerria Henderson was the top scorer for Port Gibson with 11 points and Owens had nine points to lead the Blue Wave in scoring.  Senior guard Mileeza Evans and sophomore forward T’Angela West both scored seven points on the night. Senior forward Frances Epps was the top rebounder with seven for the game. Owens had five rebounds and one steal. Port Gibson shot 12-of-31 from the charity stripe.

Wesson will travel to Wilkinson County on Friday to take on the Wildcats in their final regular season game. Game times are 6 p.m. for the Lady Cobras and 7:30 p.m. for the Cobras.

Under the direction of first year head coach Blake Smith, the Lady Wolves hope to take the courts with a... read more