Bates shines on and off the field

The former Brookhaven High School linebacker played in a game his junior year of high school against North Pike and one moment made him realize his dream could become a reality.

“A wide receiver ran a slant right across the middle and I came running and knocked his helmet right off,” Bates said with a laugh. “That was honestly the moment where I thought I could make it.”

It’s more than being a standout linebacker at the collegiate level that makes Bates special. This past fall semester, Bates was named to the vice president’s list at MGCCC for his outstanding performance in the classroom.

Bates has always been a model student and football player since he was at Brookhaven and making the vice president’s list was something he wanted to achieve.

“Being able to make my plans into a reality is something special,” Bates said. “I came to get my school in first, then play football. To be able to do both is a blessing. It’s just all working out for me.”

Bates is studying bio-medial engineering at MGCCC and plans to get his PhD and become a doctor in his field when his time in college is done.

When Bates moves on from MGCCC, he wants to look for another football scholarship elsewhere and pursue his degree in bio-medial engineering in graduate school.

“He’s always been a passionate person when he gets his mind right. He puts a lot of effort forward to get the job done,” Willie Bates Jr., his father, said. “He’s self-driven guy and a very smart guys who always gets the job done. He will be the doctor he wants to be because I know the drive he has.”

As a freshman, Bates started in eight games and was impressive at outside linebacker for the Bulldogs. Bates had 27 total tackles, one sack and one fumble recovery his freshman year and only looks to get better as time goes on.

A lot of talent comes through Mississippi at the community college level and you fight for your spot every day to make a name for yourself. That’s one of the many things that Bates has learned since he’s stepped on campus.

“You have to fight for your position because someone is always on your backside trying to take your position,” Bates said. “It’s always a challenge and it brings out the passion in you that I don’t think I had in high school.”

It’s not just in the classroom where Bates stands out. He’s also the Mississippi Baptist Youth Convention president, serving his second year on a two-year term.

“He loves the Lord. That’s just one of the many things that drives him every day,” Bates Jr. said.

Studying to be a doctor and playing football seem like the two opposite ends of the spectrum, but Bates has found similarities in both fields of work.

“You always have to look over things and look over what steps you need to make and what changes you need to make,” Bates said. “Both being a doctor and football player go hand in hand for me. It will always be a process and it never stops. You can always build on it.”

The father-son relationship for Bates III has helped him become the man he is today. From his passion on the football field to his drive to become a doctor, the only direction is up for Bates III.

“Not everyone has that chance to have their father with them every step,” Bates said. “To still see him here supporting me and to be here for me like this is a blessing.”

“I love him. I’m really proud of him and I’m with him every step of the way,” Bates Jr. said.

From his days to Brookhaven to now at Mississippi Gulf Coast, Bates’ passion and drive carries him forward. 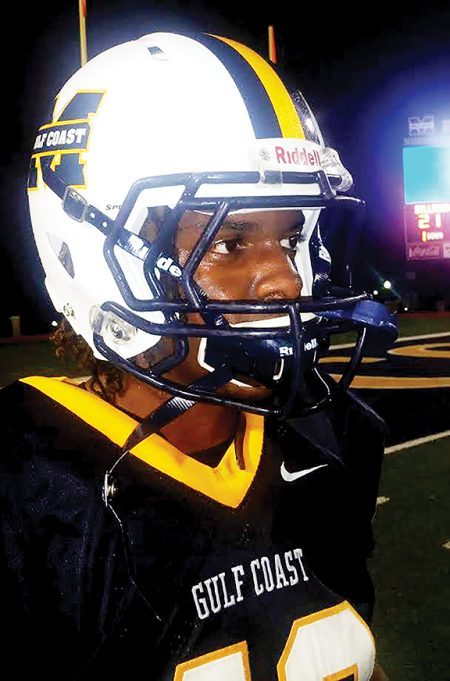 Willie Bates III is a standout linebacker for Mississippi Gulf Coast Community College, but his schoolwork and role as a student comes first.

You could say it was a big night for Brookhaven High School defensive tackle Jeffery Johnson, who received offers from... read more