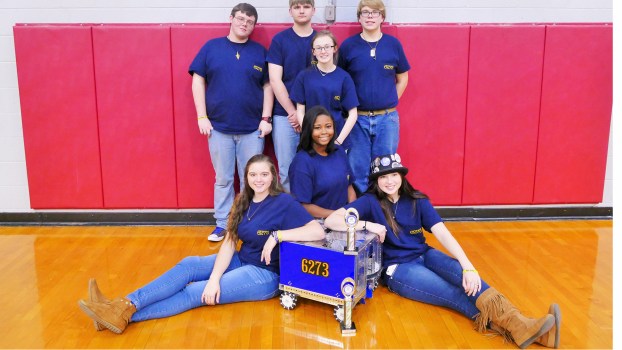 A semi-retired engineer who began teaching science to high schoolers eight years ago, Wise enjoys getting kids who are not interested in athletics involved in something that gives them other ways to compete, and ways to earn money toward college.

“We do it for the competition,” said Wise, “and for kids who are not athletic to have opportunities at other scholarships that are available to them.”

Wise is the mentor and head coach of the Bogue Chitto High School robotics team, dubbed the Technocats. Wise is also assistant for the junior high team led by Wendy Cawthorn, another BCHS science teacher. In turn, Cawthorn is assistant for the high school team.

In 2012, the University of Mississippi began sponsoring teams statewide, about 50 in all, who wanted to compete in the FIRST Robotics Competition. FIRST — For Inspiration and Recognition of Science and Technology — organizes thousands of teams that compete worldwide.

Wise saw this as a great opportunity to get his kids involved in something worthwhile, and the Bogue Chitto robotics teams were launched that same year.

Each team is made up of students in grades 9-12, ages 14-18. They compete with robots they have designed, built and programmed themselves. Teams have limited resources, and must work under strict guidelines with the guidance of mentors and coaches.

Teams that qualify to participate in the competition must successfully complete a list of tasks with their team and robot. Up to 23 teams are chosen to advance to compete at the state level. State winners advance to one of two national championships.

The Technocats qualified and will advance to the state competition to be held March 3 and 4 at Tad Smith Coliseum, on the campus of the University of Mississippi, in Oxford.

The seven members of the team are seniors, juniors and one sophomore. They are Kacy Bui, DeDe Glover, Shaylee Hedgepeth, Ian Jeansonne, Jacee Palmer, Bruce Smith and Dakota West. The robot’s name is Barely.

The students are eligible to apply for more than $50 million in scholarships, provided by FIRST and by individual colleges and universities.

Sidewalk on horizon for Turner Street

Students at Alexander Junior High walking to and from school along Turner Street will soon have better options for their... read more