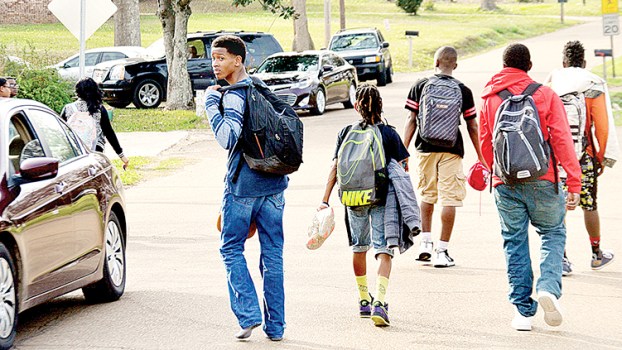 Photo by Donna Campbell/Students from Alexander Junior High walk home on Turner Street Wednesday afternoon. The Brookhaven Board of Aldermen accepted a low bid Tuesday from Southern States Construction of Brandon to extend a sidewalk along Turner Street from Rogers Street to Minerva Street. Two students were struck by a vehicle in late September walking to school because they were in the street.

Sidewalk on horizon for Turner Street

Students at Alexander Junior High walking to and from school along Turner Street will soon have better options for their travels.

The Brookhaven Board of Aldermen voted in October to advertise for bids for contractors to install a sidewalk after two teenage students were hit by a car while walking to school. The students were not seriously injured, but aldermen decided sidewalks were a safer alternative than walking in the street.

There is a drainage ditch and a fence on the north side of Turner Street and a high bank on the south side.

“There’s no other place to walk but in the street,” Mayor Joe Cox said at the October meeting before the motion was approved.

Aldermen voted Tuesday to accept the low bid from Southern States Construction of Brandon to install a sidewalk along Turner Street from Rogers Street to Minerva Street.

Southern States’ bid was around $58,000, which was about $20,000 less than the other bidder, said Brookhaven Public Works Director Keith Lewis.

WGK engineer Mike McKenzie roughly estimated the job would cost about $52,000, Lewis said, so the board was happy to see a bid come in that was only slightly more.

Ward 3 Alderwoman Mary Wilson was absent from the meeting, and Ward 4 Alderwoman Shirley Estes arrived shortly after the vote was recorded.

Lewis spent Wednesday getting easements from landowners along Turner Street. The section where the sidewalk will go stretches along the front of nine houses, he said. Lewis said there was not enough room on the north side of Turner Street to install a sidewalk.

He expects Southern States Construction to start the project in three to four weeks and that it should be completed a few weeks after that, depending on the weather.

Payment for the project will come out of the general fund.

Brookhaven Police Chief Bobby Bell was in favor of extending the sidewalks near the school. “I think it’s a great idea,” he said. “The streets in that area are very narrow and difficult for two vehicles to pass each other, leaving the children no other choice but to walk in the street.”

Lewis said the board plans to redo other sidewalks in the city as well.

BIRMINGHAM, Ala. (AP) — The horrific 1955 Mississippi slaying of Emmett Till, which helped trigger the modern civil rights movement,... read more