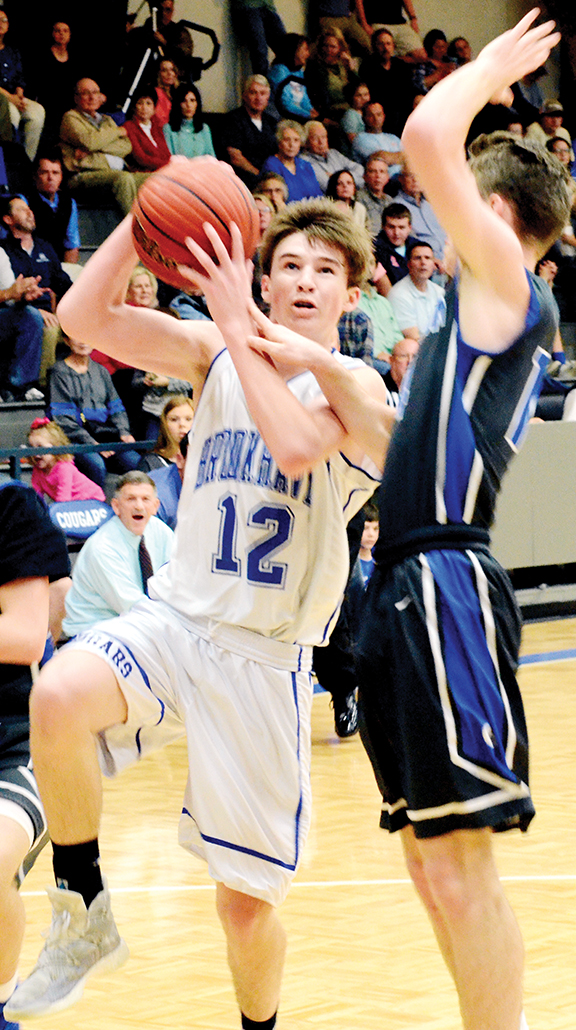 Dawson Flowers of Brookhaven Academy (12) goes in for the layup against the Simpson defender in their 44-37 loss Friday night. (Photo by Dylan Rubino)

Brookhaven Academy and Simpson Academy are familiar foes as they faced off for the third time this season. This time, a birth in the district tournament championship game was on the line Friday night.

In the matchup between the two powerhouses in the district 4AAAB tournament, Simpson Academy used a strong first quarter to put the game out of reach, coming away in the end by a score of 44-37. The loss knocked the Cougars to 23-11 on the season and eliminated the Cougars from the district title game.

“You’ve got to learn from losses like this and not get too down about it,” Brookhaven Academy head coach Josh Watts said. “I just told them they have to suck it up and learn from it. We’ve got to move on and get prepared for what lies ahead.”

The plan for the Cougars seemed simple; to put a body on Simpson point guard Sam McWilliams and make him work for his shots and not have him beat them. The plan worked as BA held McWilliams to 16 points on the game, but other players contributed in scoring that brought the Cougars down in the first half.

Simpson Academy started the game aggressive on defense and it set the tone for the game early. BA could not get in their rhythm and turned the ball over at a rapid rate, giving Simpson a 16-5 lead at the end of the first quarter.

“At the beginning of the game, we stopped 23 pretty good, but players stepped up for them and made tough shots,” Watts said. “That throws a little kink in your gameplan and put us in a bad hole to start with and we couldn’t overcome it in the end.”

The defensive gameplan for the Cougars changed in the second quarter, focusing on Simpson Academy guards Ethan Brewer and Hunter Cline shooting the ball from deep. The Cougars came out more aggressive on defense and settled into their offense.

The defensive strategy to stop Sam McWilliams worked until the very end of the first half, where he sank a buzzer-beating three to put Simpson up 29-17 at halftime.

Watts switched to a man defense in the second half, which created turnovers and fueled the transition offense and kept pace with the rival Cougars of Simpson.

Trailing 41-31 entering the fourth quarter, the Cougar defense would need some stops to give their offense a chance to come back. With under two minutes left, BA was able to cut the Simpson lead to only six points, but the offense couldn’t make the shots needed to come back and came up short in the end.

What ultimately cost the game for BA was the 18 turnovers and not converting timely shots when needed down the stretch.

“We got three defensive stops in a row when we cut it to six points, but we didn’t convert,” Watts said. “We either didn’t finish or we’d have a turnover of our own. We haven’t really grown up enough to finish in those tight situations.”

Dawson Flowers was the leading scorer for Brookhaven Academy with 10 points on the night with seven rebounds and four assists. Ethan Nations was next in scoring for the Cougars with nine points and five rebounds. Cade Brown followed up with seven points and three rebounds.

It’s not every day you see a freshman come into a team and have the immediate impact that Bogue Chitto... read more