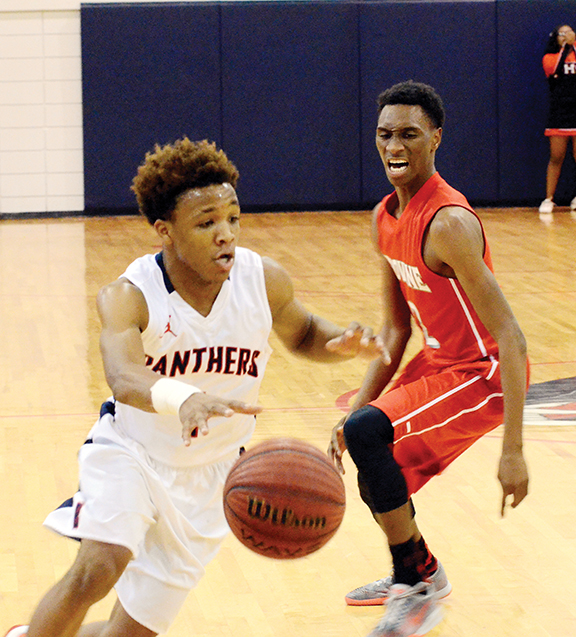 Danarius Gray of Brookhaven (1) drives past the Provine defender in a game earlier this season. (Photo by Dylan Rubino)

The Brookhaven Panthers needed a big win over Vicksburg Friday night on senior night to carry momentum into the district tournament Monday night.

It wasn’t easy, but the Panthers got the victory thanks to a dominant first quarter and timely defense down the stretch to take home the victory 65-62.

The win moves the Panthers to 18-5 for the regular season with an opening matchup against Natchez coming up Monday night in the district tournament.

“This was a great victory for us and a great way to end the regular season,” Brookhaven head coach Jimmie Butler said. “We are proud of how these seniors have led this young group of players.”

Brookhaven came out of the gates aggressive to start off, taking a 23-7 lead at the end of the first quarter that provided a big cushion for the Panthers to operate from the rest of the contest.

The healthy lead would start to disappear fast in the second quarter as the Gators outscored Brookhaven 24-17 in the quarter and cut the lead to 40-31 at halftime.

Vicksburg would win the scoring battle the last three quarters of the game after getting dominated by Brookhaven to start off the game.

The Gators cut the Brookhaven lead to 53-48 entering the final quarter of play, but the Panthers would hold on in the end and escaped with a 65-62 win to end the regular season winning four games in a row.

“We were fortunate to dominate the first quarter of the game,” Butler said. “They outscored us the last three quarters of the game and the last defensive effort sealed the win in the end.”

Senior guard Damarius Brooks led the scoring charge for Brookhaven with 19 points on 7-of-14 shooting from the field with three rebounds. Sophomore forward Lafollette Bogan was next in scoring with 16 points on 8-for-15 shooting from the field and reeled in eight rebounds. Junior guard Richard Marshall played a complete game for the Panthers with 13 points and five assists.

The Panthers will face Natchez in the district tournament Monday night at Provine High School. Tipoff is schedule for 7:30 p.m.

The Brookhaven Lady Panthers held a slim lead against the Vicksburg Gators throughout the first three quarters and took a 43-40 lead heading into the fourth quarter.

A flip switched for the Lady Panthers and the rest was history. Brookhaven came out with a different intensity the final quarter and outscored Vicksburg 32-13, taking home 75-53 victory to end the regular season.

With the victory, the Lady Panthers end the regular season winning eight of their last nine games to move to an even 12-12 for the season and a dominant 6-0 record in district play.

Sophomore point guard Shania Harris kept the Lady Panthers going Friday night with a big game, posting 20 points on 9-of-16 shooting from the field with eight assists and two rebounds as well. Sophomore forward Tamia Stallings played a big game as well with 12 points and seven rebounds on the night.

With a 6-0 district record, the Lady Panthers earned the No. 1 seed in the district tournament, as they’ll face Natchez in the opening round. Tipoff is set for 6 p.m. at Provine High School.

Brookhaven Academy and Simpson Academy are familiar foes as they faced off for the third time this season. This time,... read more