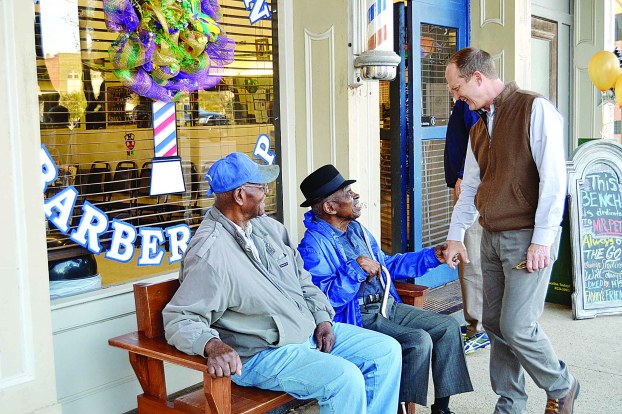 Photo by Donna Campbell/Pete Byrd (center) chats with friends Dr. J.J. Lucas (left) and Dr. Kim Sessums Friday after he was surprised with a personalized bench placed in his regular resting spot on South Whitworth Avenue.

Brookhaven icon gets his own bench

Walk past the businesses on South Whitworth Avenue any given morning and you’re likely to see Robert Byrd smiling from his perch in front of Brookhaven Barber Shop.

For the longest it was a bench, but when it turned up missing, the 87-year-old “Mr. Pete” — as he’s known around town — squatted on the brick ledge in front of the barber shop window.

She insisted he let her get him a hard back chair. He didn’t want to be a bother. Byrd is that way.

So for a while he sat in the black chair and greeted folks as they went their way. Now the chair is gone, too.

But in its place is a pine bench handcrafted by Douglas’ father, Allen Smith. It was a labor of love from the Douglas and Smith families as well as members of the community and the staff of Brookhaven Barber Shop where Douglas works.

“I love you, Mr. Pete,” Douglas said Friday as she asked him to close his eyes. Her husband and father toted the bench out of the barbershop and sat it down in his spot in front of the big picture-frame window.

Byrd was surprised with the bench, which says “Mr. Pete’s Seat” for all of Brookhaven to see. He was surprised at the party in his honor, too, which was attended by several friends and family members and involved a huge tray of cookies from Janie’s Pastry next door. Byrd is a frequent visitor there, too.

“Are you telling me that if I sit on this corner for 50 years, I get a bench?” Dr. Kim Sessums, a Brookhaven OBGYN and artist, asked Byrd jokingly.

Byrd has been a subject of Sessum’s art.

Johnny Lynch, of Brookhaven, also attended the bench reveal. “He’s always got a smile on his face,” Lynch said of Byrd.

Byrd is the O Foundation’s most recent recipient of the VIP award. Brookhaven Mayor Joe Cox gave him a key to the city and Sen. Sally Doty, R-Brookhaven, recognized him that day for his achievements.

Byrd has been a well-known member of the community for decades. If he’s not in front of the barber shop or at Janie’s, he’s probably at the Piggly Wiggly Deli, shooting the breeze with his old friends and new acquaintances.

He’s lived on Minnesota Street since the 1960s, and for decades he worked for a tailor — despite his physical disability — until a heart attack left him unable to work.

He often traveled from the men’s suit store on South Whitworth down the street to take the jackets, pants and shirts to the cleaners. He’d stop on the bench in front of the barber shop to rest. Years after retiring, that’s still his resting spot.

Parents have complained that the Twitter account of a Loyd Star school administrator “liked” pornographic images and videos. Students who... read more