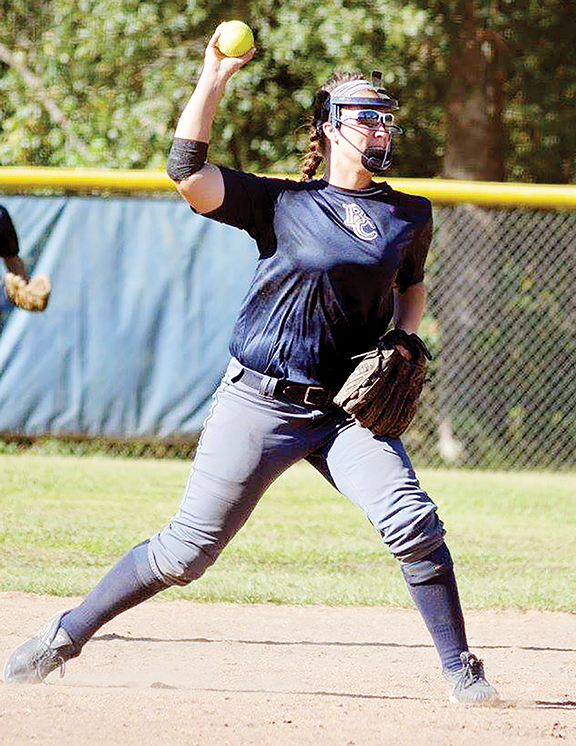 Freshman shortstop Codi Leggett for Bogue Chitto was a catalyst for the Lady Cat offense all season, leading her to be named The Daily Leader All-Area MVP for the 2016 slow pitch softball season. (Photo submitted)

It’s not every day you see a freshman come into a team and have the immediate impact that Bogue Chitto shortstop Codi Leggett had on the Lady Cats slow pitch softball team.

Batting in the clean up spot in the lineup, Leggett crushed it left and right, batting a .594 average on the season with six home runs and 58 RBIs. As a result of her stellar season, she led the team in home runs and RBIs and has been named the Daily Leader MVP of the 2016 slow pitch softball season.

“She’s young, but mentally, she plays just as well as our older girls. She was a big part of our team,” Bogue Chitto head coach Scott Leggett said. “She’s one of the good ones. One of the better hitters around this area.”

The play of Leggett was one of the many reasons that Bogue Chitto made yet another run to the Class 1A state championship game. The Lady Cats finished runner-up, but the season was a success nonetheless thanks to the play of Leggett and senior leadership from Terrah Nelson and Cherie Savoie.

“It was disappointing that our season ended that way, but I’m extremely proud of where we went,” Leggett said. “It obviously would’ve been better with a state championship, but it was a great season for us.”

Legget started playing for the Lady Cats as an eighth grader and played first base in her first season on the team. This past season as a freshman, Leggett made the move to shortstop, her natural position, and made a huge impact in the lineup and on defense.

“Codi has tremendous power and it really took off in the playoffs,” Leggett said about his shortstop. “She did a great job on the field for us at shortstop and with her power, she really helped us throughout the course of the season.”

With Mississippi being one of the last states to still play slow pitch softball, a lot of the girls on the Bogue Chitto grew up playing fast pitch. The girls needed time to adjust to playing slow pitch, including Codi Leggett.

Once Leggett found her rhythm, her play took off from there.

Diagnosed as a diabetic in third grade, Leggett has the constant worry about her sugar levels and her team keeps a close eye on her. Her diagnosis doesn’t hold her back as she continues to be a force on the field.

As only a freshman, the shortstop has plenty more years to improve, which is the scary part of it all.

“Extremely proud of Codi. Glad I get to have her for a few more years,” Leggett said. “She works hard and battles through a lot. She’s only getting better.”

Bates shines on and off the field