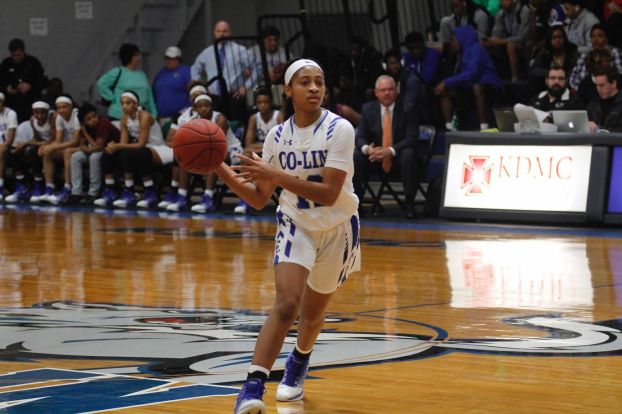 The Lady Wolves put on a shooting clinic Monday night as Co-Lin coasted past East Central 87-71. The MACJC South Division victory moves the Lady Wolves to 16-3 on the year and 9-2 in the division. Co-Lin faces rival Southwest Thursday as the Lady Wolves travel to Summit. Tipoff is scheduled for 5:30 p.m.

“I’d have to say we shot the ball pretty well,” said coach Gwyn Young. “In the third quarter we ran our offense really well…we executed and made shots.”

The Lady Wolves looked fantastic in the opening minutes with great ball movement and a 7-0 run. Co-Lin extended that lead to nine with just 2:16 remaining in the first quarter, East Central responded strongly with a 10-run of their own to end the quarter.

The Lady Warriors carried that momentum into the second quarter as they pulled away to a four-point lead with 7:45 remaining in the half. Co-Lin battled back and regained the lead just three minutes later after sophomore Tenazhia Hinkson netted a three pointer. The Lady Wolves continued to pull away and took a nine-point lead to the locker room.

In the third, the Lady Wolves put on their best offensive performance of the season. Co-Lin went an astonishing 12-for-12 from the floor and scored 25 points in the quarter. The perfect shooting performance gave the Lady Wolves a 17-point lead going into the fourth quarter. That lead was too much for East Central as Co-Lin coasted to victory as the Lady Wolves continued to find the basket.

Alexus Holt and Brittany Rose led the Lady Wolves in scoring as they both finished the contest with 18 pouts. Holt added five rebounds, while Rose led the team with eight assists. Karry Callahan added a double-double after scoring 14 and grabbing 10 boards. Hinkson finished with 13 points, five rebounds, and five assists, while Diamond Smith rounded out the top scorers with 11 points.

Co-Lin was unable to hang on to the lead late in the game Monday night as East Central defeated the Wolves 93-84. The loss moves Co-Lin to 10-10 on the year and 4-7 in the South Division. Co-Lin travels to Summit Thursday to take on the Bears. The game is scheduled to tip at 7:30 p.m.

“We really stepped up in the second half…it was good to see us fight back,” said coach Kenny Bizot. “They made some really tough shots on us, that were well contested. It’s a tough loss.”

East Central started the game Monday night with a 12-2 run that gave the Warriors a comfortable lead. This lead grew throughout the half and ECCC led by as many as 21 in final minute of the half. The Wolves refused to quit and closed out the half with a 9-0 run of their own that cut the Warriors lead to 14.

In the second half, the Wolves continued to chip away at the lead before another strong offensive run. Co-Lin went on a 26-4 run that covered seven minutes and gave the Wolves a two-point lead. The Wolves held on to this lead for six minutes of play before East Central regained control with 4:49 remaining in the game.

Co-Lin continued to fight and cut the Warriors lead to just one on several occasions in the final minutes, but an 8-0 ECCC run in the final two minutes pulled the game out of Co-Lin’s reach.

Jonathan “Biscuit” Floyd led Co-Lin in scoring with 26 points. Trae Thompson had a breakout game for the Wolves as he netted 21 points while shooting 5-for-8 from three-point range. Thompson also led the team with five rebounds. Lamarcus Lee posted 12 points, while Tyrell McArthur came off the bench and added 11.