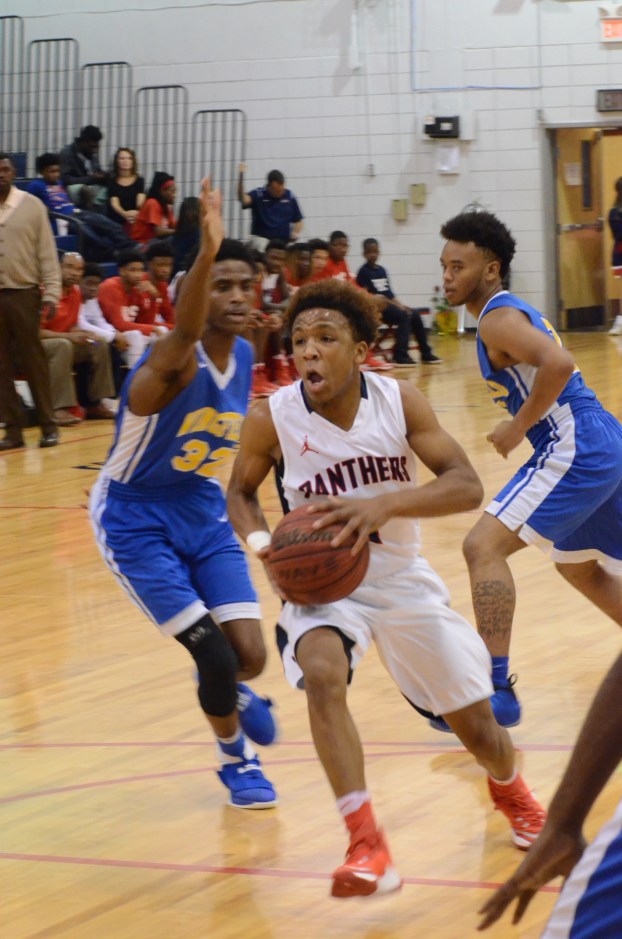 Brookhaven guard Denarius Gray (1) drives past two defenders in their game against Natchez earlier this season. (Photo by Dylan Rubino)

The last time Brookhaven and Natchez played, the Panthers used a dominating first half to put the game out of hand, winning easily 76-59.

Monday night was the third time these two district opponents met this season with Brookhaven winning both of them, but this time, a birth in the 5A Region 6 district tournament championship game Friday night was on the line.

The third meeting was much closer than the first two, with Brookhaven narrowly escaping in the fourth quarter to advance by a score of 65-59.

The win advances the Panthers to the district championship game, where they’ll face the winner of Provine and Wingfield Friday night at Provine High School in Jackson.

Beating the same team multiple times during a season is a tough task, especially when each win counts in district play. The Panthers got the nest efforts from Natchez, but prevailed in the end.

“We are so happy we don’t have to play them anymore,” Brookhaven head coach Jimmie Butler said. “Beating a good team three times in a season is always tough.”

The first half was a toss-up as both the Panthers and Bulldogs traded baskets, as the first half ended with a 31-29 lead for Brookhaven.

The Bulldogs would fight back in the fourth by outscoring Brookhaven 18-15, but Brookhaven fought to stay alive and advanced 65-59.

“We were tested in every aspect of the game and we prevailed in the end,” Butler said.

It was an off night for senior guard Damarius Brooks of Brookhaven, who’s been the scoring leader for the Panthers all season long. Brooks finished the game with 12 points on 3-of-11 shooting from the field with four rebounds and three assists.

Even with an off game from Brooks, plenty of players stepped up for the Panthers, helping them come away with the win. Junior guard Richard Marshall had the hot hand and led Brookhaven in scoring with 17 points on 6-of-9 shooting from the field, including going 5-of-7 from three-point land. Sophomore forward Lafollette Bogan almost picked up another double-double with 13 points and nine rebounds on the night. Senior point guard Denarius Gray finished with 15 points and four steals as well.

The only two losses in district play for Brookhaven have come against Provine, both by two points or less. A third matchup against the Rams would be beneficial for Butler’s Panthers.