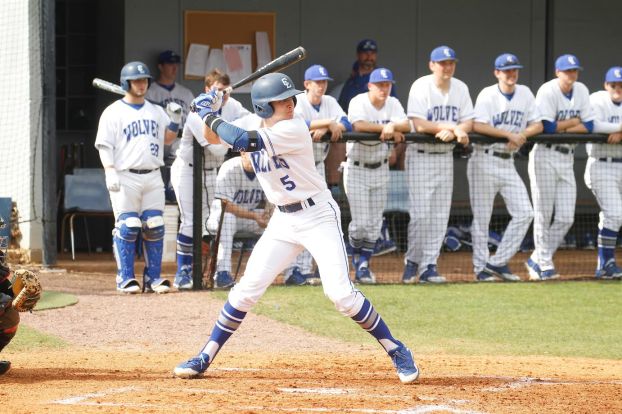 The Wolves of Copiah-Lincoln split game with Mineral Area College Saturday to open the 2017 season. The Wolves won game one handedly, 12-7, but fell in game two after an eight-run seventh inning rally fell short. The Wolves lost 11-10. The Wolves are back on the diamond Friday as Panola College travels to Wesson. First pitch is scheduled for 3 p.m.

The game was tied at four in the bottom of the fifth when Kody Smith hit a grand slam off that plated four runs. The Wolves maintained that lead for the remainder of the game.

Mineral Area took an early 2-0 lead after an error scored two, but the Wolves clawed back into contention.

Smith doubled in the second to score Matthew Mordecai, and Jaylyn Williams hit a solo shot in the third to tie the game at two all.

Co-Lin took a 3-2 lead in the fourth after Smith smashed his second double of the game that scored Reggie Conner.

Mineral Area tied things at four in the fifth before Smith broke the game wide open in the fifth. Hayden White added another two runs with a double of his own followed by an RBI single from CJ Estave. Conner Wilkinson drove in the Wolves final run with line drive to center in the sixth.

Trammell Martin earned the win for Co-Lin after throwing 3.2 innings, allowing 2 runs, 1 hit, and striking out 4. Hunter Fortenberry, Zach James, and Ryan Cullop all saw time on the mound to help secure the victory. Conner Forsyth took the loss for Mineral Area. He threw 3 innings, allowed 4 runs, 6 hits, and struck out 2.

Smith finished the day 3-for-4 with 6 RBIs and two doubles, Wilkinson went 3-for-5 with 2 RBIs and Conner batted 1.000 after going 3-for-3. Mordecai finished with multiple hits, while White drove in two runs.

Mineral Area extended an early 1-0 lead on a single in the second and extended it in the third after the Wolves walked in a run, followed by a line drive that added two more.

The Wolves narrowed the lead in the bottom half of the inning after White ripped a groundball to center field to score Chandler Dillard. Dillard reached on a walk. White scored two batters later after an infield error.

The Cardinals of Mineral Area added another seven runs over the next innings and stretched their lead to 11-2. The runs were the result of two-run homer in the fourth and a big offensive inning in the fifth.

Co-Lin would not respond until the bottom of the seventh inning. Wilkinson drove in Tyler Vroman followed by an RBI single from White that plated Blake Estabrook. Conner drove in two more runs later in the inning with a line drive to center field to keep the Wolves alive. The two-run double cut Mineral Area’s lead to 11-6. Williams scored on an error, and Vroman was hit by a pitch with the bases loaded to score another for Co-Lin. The Wolves final two runs were the result of a double from Wilkinson that scored Mordecai and Tyler McLeod.

Logan Winder earned the win for Mineral Area College after throwing 2.2 innings, allowing 2 runs, 3 hits, striking out 4, and walking 1. Blake Sigrest took the loss for Co-Lin. He pitched 3 innings, giving up 4 runs, 5 hits, and striking out 2. Anthony Clapp Jordan Bowden, Zach James, and Tyler Etheridge all made appearances for the Wolves.

Wilkinson and White led the Wolves offensively with two and three hits respectively. Wilkinson finished with 3 RBIs while White had 2 RBIs. Conner also finished the game with a 2 RBIs, while McLeod and Vroman finished with one.

District 7-2A tournament kicks off