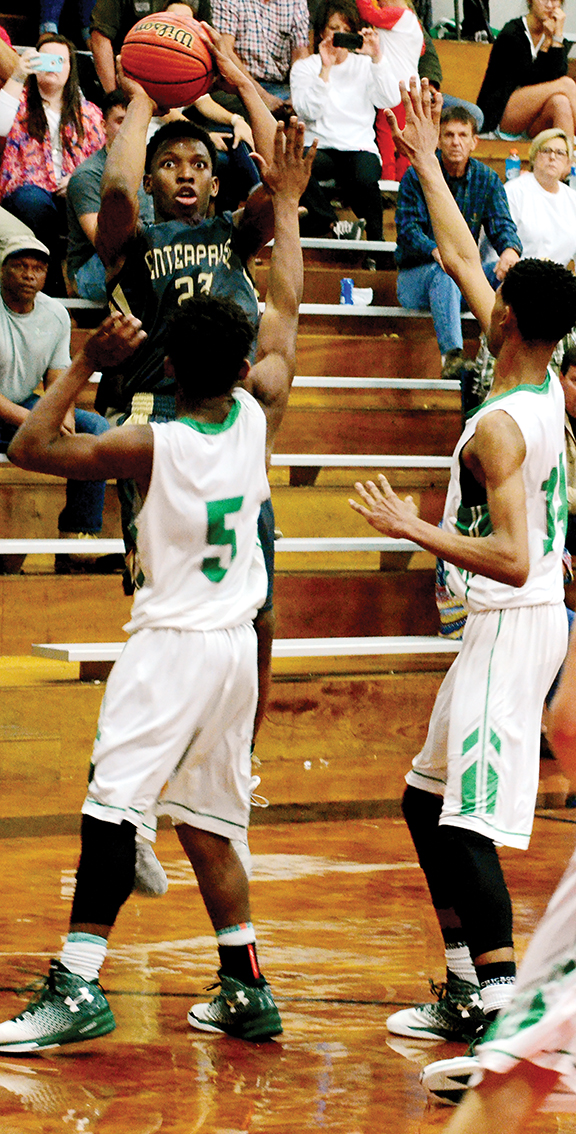 Dwayne Pendleton of Enterprise (23) drills the game-winning three over two defenders in OT to give the Yellow Jackets the 49-46 win over county rival West Lincoln. (Photo by Dylan Rubino)

Pendleton’s game-winner highlights day one of 7-2A tournament

Loyd Star High School saw plenty of action Tuesday night, as it hosted round one of District 7-2A district tournament.

In a thrilling game from start to finish, Enterprise senior guard Dwayne Pendleton drilled the game winning three-pointer from the right side of the court as time expired in overtime to give the Yellow Jackets a 49-46 win over county rival West Lincoln.

Enterprise started off the game going on an eight-point run before West Lincoln junior guard Ledarrius Jones finally got the Bears in the scoring column. Enterprise was locked in on defense to start the game, taking an 8-2 lead into the second period.

Halfway through the second period, West Lincoln was able to tie the game at 12 all, and take the lead away from Enterprise. West Lincoln out-scored Enterprise 15-7 in the second quarter, taking a 17-15 lead into halftime.

Enterprise and West Lincoln would trade leads throughout the third quarter. With minutes left in the third, West Lincoln took advantage with a 29-23 lead into the fourth period.

With Enterprise trailing by 10 with less than three minutes left, the Yellow Jackets scored 10 straight points to tie the game and eventually send it into overtime.

With seconds remaining in overtime, Pendleton called his own number. The senior rose up from deep while  faced by two West Lincoln defenders, and nailed the game-winning three to give his Yellow Jackets the 49-46 win. Pendleton rose to the occasion when his team needed him most, scoring 15 of his 19 points in the fourth quarter and overtime.

Amite County played a very physical game from start to finish, which took Enterprise out of their rhythm early. The Lady Trojan defense helped knock off the Lady Jackets by a score of 61-48.

The Lady Trojans stifled the Lady Jackets on defense the entire game, which helped them take a 32-25 lead into halftime.

Amite County separated themselves from Enterprise thanks to a 13-5 scoring difference in the third quarter and put the game out of reach. Amite County rode their tenacious and opportunistic defense to a 45-30 lead heading to the fourth quarter.

Despite being down 55-32, the Lady Jackets refused to quit as they made an effort to cut into the Amite County lead, but it was too late.

The West Lincoln Lady Bears started the district tournament game on fire, scoring the first nine points of the game. The Lady Bears would dominate the rest of the first quarter, taking a 14-2 lead into the second quarter.

The second quarter would belong to the Lady Bulldogs of Prentiss. They would out-score West Lincoln 12-4 in the quarter, and trailed West Lincoln 18-15 at halftime.

Behind better defense, the Lady Bulldogs closed the gap on West Lincoln, as they trailed 26-20 halfway through the third period. With over two minutes left in the third, the Lady Bear offense took over and started pulling away, taking a 41-24 lead into the final period.

The West Lincoln offense put the game out of reach for Prentiss, as they moved on in the district tournament with the 61-43 win.

In an up and down second quarter, Amite County fought right back and took a 27-24 lead going into halftime.

With 45 seconds left in the third, Loyd Star clawed back to take the lead, but it was short-lived as Amite County re-took the lead 37-35 going into the fourth period.

Both teams would trade leads in the fourth quarter until minutes left in the game when Amite County hit a three-pointer and took control of the game, knocking off the Loyd Star Hornets 49-43.

Tournament play will continue tonight at Loyd Star. Tip off is slated for 4 p.m.