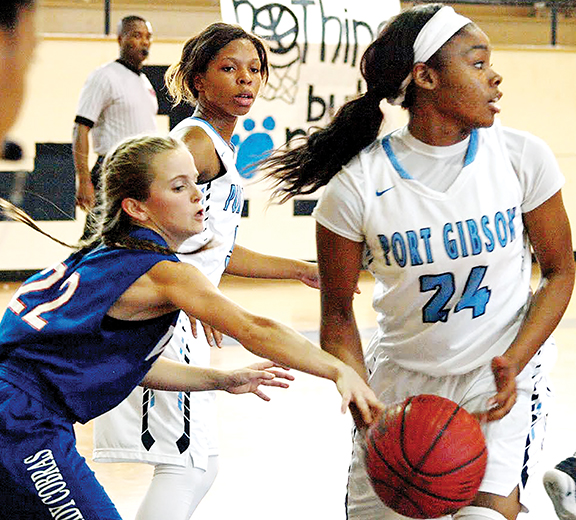 Shelbi Maxwell of Wesson tries to steal the ball from NaKendra Owens of Port Gibson in their 41-25 loss Tuesday. With both Wesson teams losing, their 2016-17 seasons have ended. (Photo by Tracy Fischer)

Wesson out in district tournament

The Lady Cobras met the Port Gibson Lady Blue Wave Tuesday night in in the opening night of the district tournament at Franklin County High School.  The Lady Cobras started strong with freshman Shelbi Maxwell hitting a three-pointer and the foul to put four quick points on the board. The Lady Wave of Port Gibson led 10-6 at the end of the first quarter.

Port Gibson’s defense was aggressive the entire game and took advantage of several turnovers to jump ahead of the Lady Cobras and ended the game with a final score of 41-25.

“Some games you just don’t have it and tonight was one of those nights,” Wesson head coach Candice McDuffey said after the game.

The top scorer for Wesson was senior guard Aurianna Vaughn with 11 points, four rebounds and one steal. Freshman guard Shelbi Maxwell was the next leading scorer with eight points. The Lady Cobras shot 3-of-6 from the free throw line.

It was a hard-fought game for the Wesson Cobras as they took a lead into the fourth quarter, but they couldn’t finish the job as Hazlehurst came back to win 64-54. The loss dropped Wesson to 11-14 overall on the season, ending their 2016-17 season.

“We just couldn’t close the game out.  We had a lead going in to the fourth quarter and we just made too many mistakes down the stretch and Hazlehurst took advantage of our mistakes,” Wesson head coach Rusty Newman said. “I hate to see the season end like this but that’s part of it sometimes. I’m proud of my guys for a good season.”

The Cobras and Indians played an aggressive game with the Indians holding a tight lead at the end of the first quarter and going into halftime.

In the third quarter, the Cobras found their groove and jumped ahead of the Indians with a three-pointer by sophomore guard JD Allen. Wesson held the lead into the final minutes of the game, but the Indians jumped ahead by 10 when the Cobras missed some crucial shots. The Indians took the win with a final score of 64-54.

The top scorer for Wesson was Allen with 19 points, four rebounds and four steals. Sophomore forward Jontavius Smith had 13 points, 12 rebounds, four blocks and three assists. The Cobras shot 6-of-9 from the charity stripe.

Thanks to scoring contributions from the entire roster, the Bogue Chitto Lady Cats dominated Mount Olive Tuesday night in a... read more