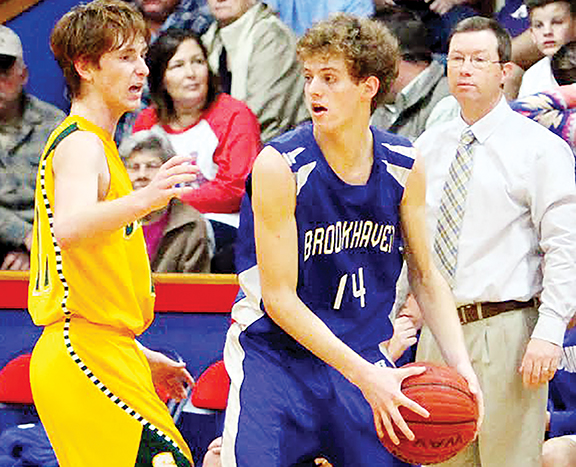 Dylan Winborne of Brookhaven Academy (14) looks for the open man while head coach Josh Watts looks closely from behind in their 51-29 win over Silliman Wednesday night. (Photo by Sherylyn Evans)

BA Cougars win in first round of South State

The Brookhaven Academy Cougars were looking to stay alive in the AAA South State tournament Wednesday afternoon as they faced off against the Silliman Institute Wildcats. The Cougars answered the call and secured a spot in next week’s AAA State tournament with a 51-29 win over the Wildcats.

With the game close in the first half, the BA Cougars (25-11) used a strong defensive effort in the second half, holding Silliman to just 12 points and cruised to the 51-29 win. Ethan Nations led the way for BA with 21 points and 11 rebounds. Cade Brown added 10 points and five boards while Dylan Winborne chipped in nine points to round out the scoring leaders for Brookhaven Academy. Patrick Cain led Silliman with nine points for the afternoon.

With the win the Cougars will face the top-seeded Columbia Academy Cougars Friday night in the semifinals of the AAA South State tournament. Tipoff is set for 7:45 p.m. The winner of the matchup between BA and Columbia Academy will face the winner of the Bowling Green School and Simpson Academy in the championship game. The championship game will tip off Saturday at 6:15 p.m.

Wesson out in district tournament

The Wesson Cobras and Lady Cobras both suffered early exits in the Region 7-3A district tournament Tuesday night as the... read more