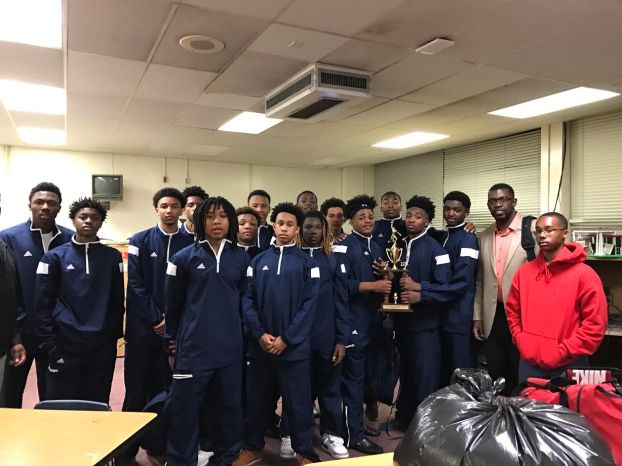 The Brookhaven Panthers took down Provine 82-81 Friday night to win the 7-5A district championship. The team celebrated in the locker room afterwards. (Photo by Dylan Rubino)

JACKSON — The well-know proverb “third time’s a charm” can be used in many different ways, but for the Brookhaven Panthers, it meant everything Friday night.

Brookhaven lost their previous two matchups against Provine High School, both by two points and less. The Panthers got their revenge Friday night in front of a raucous crowd, as they won a nail-biter from start to finish against the rival Rams 82-81.

It’s the first district championship for the Panthers since 2013.

The only obstacle that seemed to be in the Panthers way were the Provine Rams, who entered the matchup Friday night with a perfect 5-0 record in district play. Brookhaven head coach Jimmie Butler knew his team was capable of taking down Provine, and his team proved it.

“We knew we could compete with them. We just needed to be better on the defensive side of the ball and we needed to have a great shooting night,” Butler said. “We committed ourselves to game preparation and we believed we could win the ball game.”

It was the best shooting night of the season for Brookhaven as they finished the game with 82 points on an efficient 60 percent from the field.

Leading the scoring attack was sophomore forward Lafollette Bogan. Bogan had the best game of his career for Brookhaven as the versatile forward finished the game with a game-high 31 points on 13-of-16 shooting from the field with ten rebounds and two assists as well.

“He’s a young kid with a big future. His work ethic paid off for him tonight,” Butler said. “He stayed within his game by running the floor, rebounding and making layups in transition. He was also able to make the corner shots that we noticed were open during the previous games.”

The corner shots were open all night for Bogan, as the sophomore seemed to make every timely shot for the Panthers, leading to the best game of his Brookhaven career.

“No doubt this was Lafollette’s best game,” Butler said. “He’s only getting better and his perimeter game is developing as well.”

With the Panthers holding a slight lead at 38-37 going into halftime, the game could’ve gone either way with how both teams were shooting the ball. With the game tied at 57 heading into the fourth quarter, the game trended towards whoever had the ball last would win the game.

The Panthers made the timely shots in the fourth quarter and now they’re district champions.

Senior guard Damarius Brooks was the next leading scorer for Brookhaven with 22 points on 7-of-13 shooting from the field. Senior point guard Denarius Gray kept the fast-paced tempo the Panthers like to play with going the entire game. Gray finished with 12 points, adding on six assists and five rebounds.

Even with Brookhaven losing their first two matchups against Provine, the confidence and preparation of the team carried them to the win on the road and they’re now district champions.

“In our opinion, we were facing the giants,” Butler said. “It feels great and even better realizing that when we trust, believe and have fun, then our chances for success are even greater.”

Justin Sawyer, who was hired earlier this month to take over the football program at West Lincoln, died early... read more