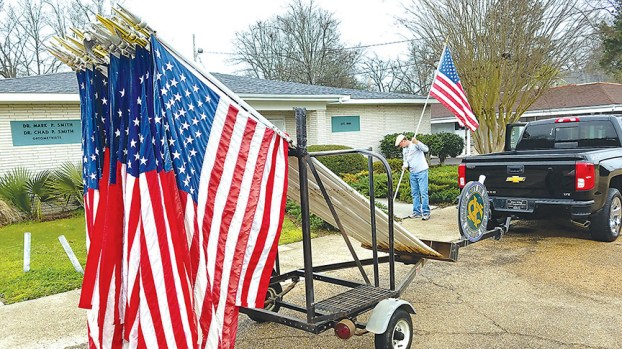 Photo by Donna Campbell/Larry McFadden, board member of the Brookhaven Exchange Club, places American flags around the city in preparation for Presidents Day.

Flags are so gallantly streaming once again

Bill Haag remembers being about 4 years old and seeing his father and others with the Brookhaven Exchange Club place flags around the city.

Now part of the Exchange Club himself, Haag and other club members place about 125 flags around town leading up to President’s Day, Veterans Day, Memorial Day, Flag Day and Independence Day.

The flags are meant to honor  members of the armed forces, the nation’s leaders and the country.

Motorists driving down Brookway Boulevard from the interstate all the way to the UA Westbrook 4 movie theater can see American and Mississippi flags posted along the roadway, along with flags remembering P.O.W.s — prisoners of war.

Haag said he can say for sure that the flags have been placed by the club at least since 1960. “I know they had been doing it for a while before then, though,” he said.

“We have the trailers now,” Haag added. “My dad and others would take flags around in the backs of their cars and put them out around town.”

This year the club added a single flag at each corner of the Hwy. 51 and Brookway Boulevard intersection. The flags represent four branches of the military — Army, Air Force, Navy and Marine Corps.

The flags will remain on display through President’s Day.

The lights streaming from the old wooden windows have caused motorists to slow down as they pass the Jack Hardy... read more