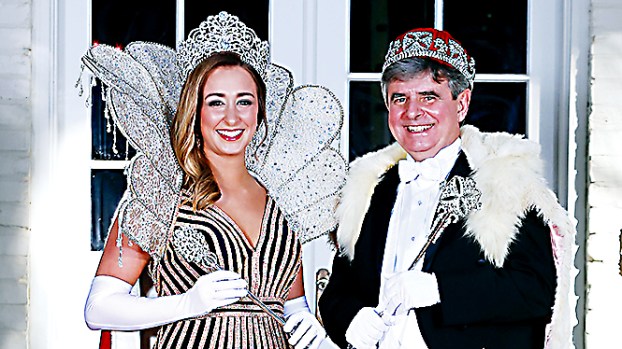 Photo submitted/King William Orton Jacobs and Queen Audrey Rae Montalvo , both of Brookhaven, were chosen as the 2017 royalty for the Krewe of Ceres Charity Ball Saturday at the Lincoln Civic Center. This is the Krewe of Cere’s 50th anniversary.

The Krewe of Ceres crowned its 2017 royalty Saturday night at the annual charity ball.

King William Orton Jacobs and Queen Audrey Rae Montalvo were celebrated during the 50th anniversary ball, which was held at the Lincoln Civic Center. The theme acknowledged the milestone — “Celebrating Fifty Years of Royalty” — and the colors emanated the anniversary theme as well, with a profusion of gold and white filling the hall.

The stage for the royalty was lined with gold pillars garnished with floral arrangements brimming with white and gold. A shimmer of gold material then connected these. To finish the stage, there was an immense “50” awash in gold towering behind the royalty to once again give credence to this landmark event.

The tables where decorated with white linen topped with shimmering satin gold table runners. These were then topped with 16 inch eiffel tower vases irradiant with faith lights and encompassing a single hydrangea engulfed in sparkling gold accents. Between these were candles to give a soft glow to the decor. The party goers dined on scrumptious food nestled between white columns embellished with a cascade of greenery, trimmed with hints of white roses and accentuated with gleaming gold highlights

Proceeding over the festivities were bellows of white fabric illuminated with lights to give a hushed glowing ambience to the evening. Former kings and queens in attendance were recognized.

Jacobs was born in Wauseon, Ohio, to Chuck and Pat Jacobs. He briefly lived in Sarasota, Florida, before arriving in Brookhaven in 1958 after his parents purchased the bi-weekly The Leader-Times and moved their young family to the Home Seekers Paradise.

He is an early 1973 graduate of Brookhaven High School as well as a graduate of the 1973 class of Woodward Academy in College Park, Georgia.

He joined McRae’s Department Stores’ executive training program in 1977. He worked in the buying offices in Jackson and later worked as an area sales manager in both the Natchez and Jackson Metro Center stores. During his years at McRae’s, he met and married fellow training program participant, the former Amy Oldham Alexander, of Dyersburg, Tennessee.

In 1980, he became the managing editor of The Daily Leader, which began a professional newspaper career spanning 32 years. He purchased his first newspaper, The Prentiss Headlight, a weekly in Jefferson Davis County, in 1985.

He became publisher of The Daily Leader in 1995 after purchasing controlling interest of the newspaper from his family. When he sold his newspaper operations in December 2012, his companies included a daily and weekly newspaper, two multi-county free distribution weekly newspapers, a monthly real estate magazine, a quarterly regional magazine, two websites and a commercial printing and mailing operation that printed area newspapers and other publications.

Active in local, state and national civic and trade organizations, he is a member of the Board of Directors of the National Newspaper Association Foundation and currently serves as the Foundation’s treasurer.

Prior to selling his newspaper companies, he was a regional director and executive committee board member of the National Newspaper Association representing Mississippi, Alabama, Georgia, South Carolina and Florida.

Active with the Brookhaven / Lincoln County Chamber of Commerce, he has served as president of the organization as well as chairman of both the Industrial Development Foundation and the Linbrook Alliance.

Jacobs is a graduate of the Mississippi Economic Council’s 1987 Leadership Mississippi class and is currently a member of MEC’s board of governors as well as a director of MEC’s M.B. Swayze Foundation.

In 2015, he was named a trustee of King’s Daughters Medical Center and serves on the hospital board as treasurer.

The former newspaper editor and publisher has been honored personally with numerous editorial and advertising awards over his newspaper career by the Mississippi Press Association as well as the Mississippi / Louisiana Associated Press Association for editorial writing, news reporting and photography. His newspapers were regularly recognized with the coveted overall general excellence awards in both editorial and advertising — winning the top advertising award for a record setting seven straight years. In 2009, both Jacobs and his father were jointly honored by the O Foundation for their community service.

Jacobs has traveled internationally representing the National Newspaper Association, the Inland Press Association and the Southern Newspaper Publishers Association on political and government study missions to Egypt, Nicaragua, Cuba and both the former East and West Germany.

He, too has participated in and led lobbying efforts for NNA on Capitol Hill as well as the U.S. Postal Service in Washington, D.C.

Jacobs is an active member of Faith Presbyterian Church where he has participated in tornado relief efforts in north Mississippi as well as mission work in Belize. He was a longtime member of First United Methodist Church where he served as administrative board chairman.

Jacob’s greatest joys are his daughters and newly-acquired son-in-law. Ann Kirkpatrick (Mrs. Cornelius Block Harris) is an assistant district attorney serving Jefferson Parish in New Orleans and her husband, Neil, is a CPA with Ernst & Young in New Orleans. His younger daughter Meredith Alexander is an architect with Gresham Smith and Partners in Nashville, Tennessee.

Montalvo is the daughter of Dr. Ray and Julie Montalvo, of Brookhaven, and granddaughter of Mr. and Mrs. Harold Efron and Mrs. Gilda Moore and Mr. Ray Alfredo Montalvo Sr.

Montalvo was a special honors graduate of Brookhaven High School in 2014 where she was elected to the student council serving as class representative, secretary and president her senior year.

She was a member of the mock trial team and served as statistician for the Brookhaven High School baseball team. She was on the varsity soccer, cheer and cross country teams, serving as captain in soccer and cheer.

During her years at BHS, she was elected a member of the homecoming court, selected as class favorite and most popular and named a scholar athlete. She was awarded the Most Valuable Defense award in soccer three years as well as being named All-American cheerleader.

As a senior at BHS, she was named to the Academic Hall of Fame and the Athletic Hall of Fame for soccer and cheer, and was awarded the AP Literature and Composition award and the AP Calculus award.

She was also given the President’s Award for Educational Excellence and the Mu Alpha Theta award for the highest cumulative average for four years in math.

While in high school, she held positions as soccer referee for the Brookhaven Recreation Department and as a lifeguard at the Brookhaven Country Club. She was passionate about volunteering at the Brookhaven Animal Rescue League. Montalvo is a junior at MSU pursuing a degree in kinesiology and clinical exercise science.

She is a presidential scholar and has been recognized for her academic achievements on both the president’s list and the dean’s list.

Montalvo is an active member of the Chi Omega Sorority at MSU. Along with her sorority sisters, she helps with fundraisers for the Make-A-Wish Foundation, granting wishes to children with life-threatening medical conditions. Her volunteering does not stop there, however. She has worked with the Palmer Home for Children, a nonprofit Christian organization that provides residential care to children in need. Additionally, as part of the ACCESS Program, Audrey mentors a student with special needs in areas of health, wellness and academics.

For the past year, she has been employed by the sociology department at MSU, where she works in the office and assists professors with research projects.

She continues to contribute to the National Cheerleading Association, traveling throughout the mid-south and southeast United States to cheerleading camps teaching skills to groups of up to 200 cheerleaders.

Upon graduation, Montalvo plans to further her education and receive her doctorate in physical therapy. Her wish is to work with special needs children and share her love of life with them.

She is a member of St. Francis of Assisi Catholic Church in Brookhaven.

She also holds close family ties to the annual charity ball. Her parents served as Krewe of Ceres members for over 20 years. She served as an aide in 2007 and maid in 2016.

Q: Someone from the power company called saying I owe money and if I don’t pay, they’ll cut off my... read more