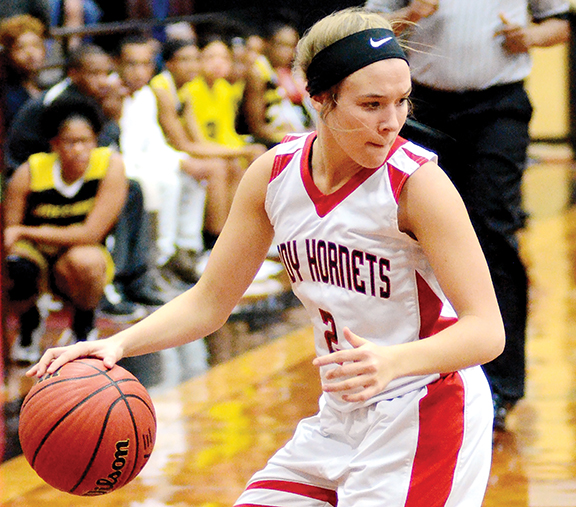 Lydia Britt of Loyd Star (2) dribbles from the defender in their 53-42 win over Amite County Thursday night. (Photo by Dylan Rubino)

The champions of the district 7-2A tournament were crowned Friday night at Loyd Star High School. The Loyd Star Lady Hornets battled against Bassfield for the girl’s title, but couldn’t keep up with the Lady Jackets in the second half, falling by a score of 59-50.

Prentiss won a defensive battle against Bassfield 32-27 to take home the boys championship. The West Lincoln Lady Bears fell in overtime against Amite County in the girl’s consolation game by a score of 51-48.

Amite County squeezed out a win over Enterprise in the boys consolation game by a score of 64-63.

The Loyd Star Lady Hornets jumped out to an early lead to start the game and finished the first quarter with a 16-9 lead. Bassfield would win the second quarter, outscoring the Lady Hornets 9-7, but trailed 23-18 at halftime.

The fourth quarter featured a barrage of points, with both schools combining to score 44 points in the quarter. Loyd Star would make a last minute attempt for a comeback, but it wasn’t enough in the end as Bassfield won the district championship by a score of 59-50.

“We slacked in the third period. Didn’t get any breaks. We had too many walks.” Loyd Star Coach Britt said.

The Loyd Star Lady Hornets will host Newton on Monday in the first round of the 2017 MHSAA Girls  Playoffs. Tip off is at 7 p.m.

The game started off as a defensive struggle between West Lincoln and Amite County with the Lady Bears taking a 8-5 lead into the second period.

The lead changed multiple times throughout the second quarter with the Lady Trojans taking a 20-17 lead heading into halftime.

Lead changes would be the theme throughout the game, but regulation would end with the score tied at 42, forcing overtime. In the end, Amite County made the shots needed to defeat West Lincoln in overtime by a score of 51-48.

Senior guard Demesha Deer and sophomore guard Megan Gerald were named to the all district team for West Lincoln.

Senior guard Courtney Greer for Enterprise was also named to the all district team for the Lady Jackets.

The first half of the game would belong to Amite County, as they would take a commanding 29-14 lead going into halftime thanks to a 20-point second quarter for the Trojans.

Enterprise opened up the second half on an 11-point run to cut into the Amite County deficit. The third quarter swung in favor of the Yellow Jackets as they would explode on offense by scoring 29 points in the quarter and trailed 48-43 heading into the fourth quarter.

A strong defensive effort in the final quarter gave the Yellow Jackets a chance at the comeback, but Amite County got the final stop of the game to take home the close 64-63 win.

JACKSON — The well-know proverb “third time’s a charm” can be used in many different ways, but for the Brookhaven... read more