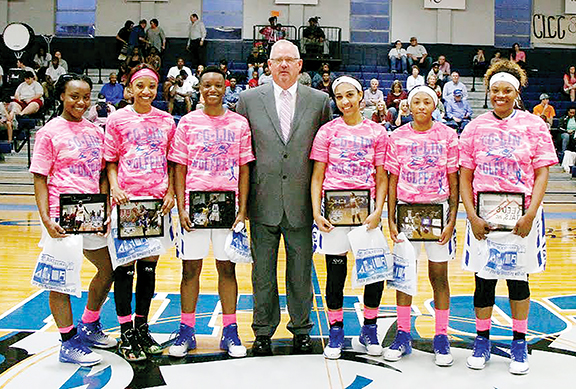 The Lady Wolves shot nearly 50 percent from the floor Monday night as Co-Lin cruised passed Meridian with an 80-65 victory. The win moves the Lady Wolves to 18-3 on the year and 11-2 in the MACJC South Division. Co-Lin’s final regular season game is Thursday at 5:30 p.m. as the Lady Wolves travel to Pearl River, followed by the MACJC State Tournament next week at Jones County Junior College.

“We hit a couple of great spurts early in the game,” said head coach Gwyn Young. “We tried to spread the ball around floor, and were lucky enough to get some rebounds and put them back in the basket…it wasn’t one of our best games and there is always room for improvement.”

The Lady Wolves scored early and often as Co-Lin bolted to a 10-0 lead in the first minute in the game. The Lady Wolves continued to grow this lead throughout the quarter with solid shooting from the floor and lockdown defensive play. Co-Lin held the Lady Eagles to zero points from the floor in the opening quarter, and led 17-5 going into the second.

Meridian’s offense came alive in the second half as they netted 21 points to Co-Lin’s 18. The quarter was mostly back and forth action, and the Lady Wolves took a seven point, 35-26, lead into the locker room.

Co-Lin pulled the game out of the Lady Eagles reach early in the second half with a 9-0 run that gave the Lady Wolves a 15-point lead. This grew to 20, Co-Lin’s largest lead of the contest, midway through the fourth quarter before the Lady Wolves slowed down on offense and played more conservatively.

Karry Callahan led the Lady Wolves with a double-double on the night after netting 16 points, and bringing down 15 rebounds. Brittany Rose added 16 points of her own and led Co-Lin with six assists. Alexus Holt finished with 14 points and four assists while Tenazhia Hinkson netted 12 points and grabbed six rebounds.

With the Co-Lin Lady Wolves standing at 18-3 overall on the season, they still trail Jones Community College in the south division standings. Jones is 21-1 overall and 12-1 in south division play.

The Lady Wolves next opponent, Pearl River, stands at 10-10 overall and 3-10 in south division play. A win can go a long way Thursday against Pearl River for Co-Lin.