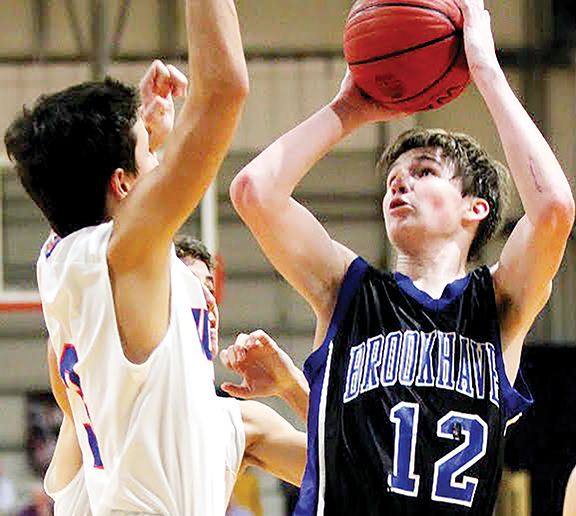 Dawson Flowers gets the rebound and goes in for the game winning shot with 0.8 seconds left on the clock. (Photo by Sherylyn Evans)

The Brookhaven Academy Cougars (27-12) knew coming into the AAA state tournament their first round opponent in Starkville Academy would be primed for action and that it would take a full team effort to come away with the victory. Brookhaven Academy head coach Josh Watts and his team were up to the task, knocking off the Volunteers and advanced to the semifinals with a 50-49 win. The state tournament is being held at Kirk Academy in Grenada.

With .08 seconds left on the game clock and the Cougars with the ball trailing by a point, the outcome of the game was hanging in the balance. After a missed shot attempt, BA forward Dawson Flowers corralled the rebound and put the ball back in the basket as time expired, giving the Cougars the last-second win and the opportunity to advance and play another day.

Ethan Nations led the Cougars in scoring with 14 points and seven assists on the night. Dylan Winborne scored 13 points for the Cougars and Tate Felder followed up with 12 points in the contest. Reed Stevens led Starkville Academy with a 20-point outing.

With the win, the Cougars will face the North’s No. 4 seed Leake Academy at 7:15 p.m. Friday evening. Leake upset the state’s top-ranked AAA team in Columbia Academy to advance to the next round.

The Lady Wolves shot nearly 50 percent from the floor Monday night as Co-Lin cruised passed Meridian with an 80-65... read more