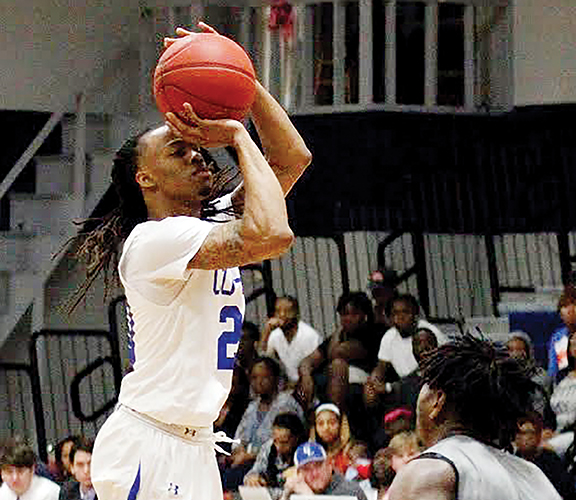 Lamarcus Lee of Co-Lin shoots over the defender in their 84-74 loss Monday night to Meridian. (Photo by Natalie Davis)

The Wolves were unable to defeat Meridian at home Monday night as the Eagles shot the lights out. The 84-74 loss moves the Wolves to 10-12 on the year and 4-9 in the MACJC South Division.

Co-Lin travels to Poplarville tonight to play Pearl River for the final game of the season. The game is set to start at 7:30 p.m.

“This was a really bad loss for us,” said head coach Kenny Bizot. “I’ve looked really hard into why we keep getting off to such rough starts, and my only answer is simply that we aren’t shooting the ball well…credit Meridian on making shot after shot tonight. It’s just hard to come back from that.”

Co-Lin never seemed in control of the game as the Eagles climbed to an eight-point lead in first four minutes of action Monday night. Freshman Lamarcus Lee led the Wolves on a brief comeback. The 12-2 run gave the Wolves their first lead of the game with 9:55 remaining in the half.

The action went back and forth until Meridian went on a scoring run and took a nine-point lead into the half.

The Eagles lead grew early in the second half and stretched to as much as 17 with 16:06 left in the contest.

The Wolves made several small runs in an effort to cut the Eagles lead but all fell short as Meridian quickly recovered and pulled the lead back to double digits.

Lee led the Wolves with 26 points in the game. The freshman also had six rebounds and five assists. Anthony Jones, a Wesson native, came off the bench and scored 17 for the Wolves and grabbed five rebounds. Jonathan “Biscuit” Floyd scored 15 for Co-Lin and Youry White led the team with 12 rebounds.