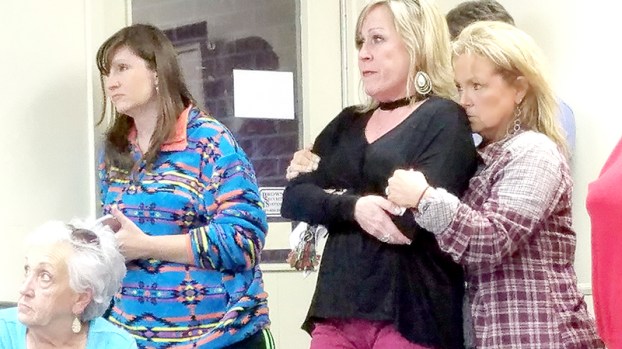 Photo by Donna Campbell/Loyd Star business teacher Sherry Davis, in black, is consoled by a friend after she urged the Lincoln County School Board to investigate accusations of wrongdoing by Loyd Star Principal Robin Case.

What started out as a routine meeting of the Lincoln County School Board Tuesday night, quickly turned into chaos and emotional pleas as a group of about 20 parents, teachers and residents faced off against the board and demanded to be heard.

The men and women who walked into the meeting lined the walls, circling the board members who had just celebrated at a Mardi Gras-themed reception in the board room for School Board Appreciation Month.

The crowd remained silent through the agenda discussion, which was mostly consent agenda items and the docket of claims. However, at one point during the discussion, resident Melissa Posey interrupted the meeting to ask, “How can you guys decide anything when you have corruption on the board?”

It was when the board discussed having a work session in coming months to discuss the Loyd Star football field, a need for school nurses and 5- and 10-year plans for the district, that the  group began to get vocal.

Board President Kay Coon called for an executive session to discuss personnel matters, and asked the public and school district employees to leave the room.

Posey said she and other others would not leave and said it’s not fair that the board can “make decisions about people’s lives” in closed-door meetings.

While they were gone, Posey turned to the board members: “We want to know what you guys are going to do about the corruption on this board?”

When Myers and Presley returned, Myers said he believed most of the people there were concerned about the accusations against Loyd Star Assistant Principal Billy Vaughn concerning a Twitter account he created that showed pornographic images and videos. Vaughn was placed on administrative leave with pay Feb. 3 by Myers while the account was investigated by Mississippi Department of Education and forensic experts, Myers said.

However, the group’s spokesmen said they were more concerned about recent posts on a Facebook page called “Restore Humanity, Ethics and Peace at Loyd Star.”

The majority of the posts are from Posey, who created the public group Friday. It includes video of audio recordings allegedly made of private conversations between Loyd Star Principal Robin Case and others in Case’s office.

Posey said in a post that the audio was “obtained legally and without prejudice.”

However, Lincoln County Sheriff Steve Rushing said a complaint was filed about the recordings by the school district and his office is working with the Attorney General’s office to determine if the recordings are a criminal or civil matter and if criminal, should it be a state or federal investigation.

“They believe those recordings were made without those people’s knowledge,” he told The Daily Leader Tuesday. “It’s early on to say whether there’s an actual crime being committed.”

But in the meantime, the parents and teachers who attended the school board meeting want answers.

Melaine Daigle’s 14-year-old daughter is a special needs student at West Lincoln Attendance Center. She was angered by the audio clips she heard that she said document Case calling special education students by derogatory terms.

Daigle urged them to do something to investigate the allegations against Case. “You don’t need to be at this table, you don’t, if you don’t stand up for our kids,” she said. “Work with us. Can you do that? That’s all I ask.”

Posey put it more bluntly. “Robin Case must go,” she said, then added that teachers were “shaking in fear” at Loyd Star.

Presley suggested the group meet with her to discuss plans she has for special ed students in the district, but no one seemed interested. Daigle said she was happy with the program at West Lincoln. She just wants Case gone so she won’t become superintendent in the future now that the board will make appointments rather than the position being filled through a public election.

“Listen to these tapes. Listen to what this lady has to say about our children,” Daigle said. “Billy Vaughn is a big boy. He can fight his own battles.”

A Loyd Star business teacher, one of about four educators in the crowd, spoke up to tell the board that she had a target on her head. “She knows I’m not scared of her,” Sherry Davis said. “I love those kids and that’s why I am there. Somebody has got to stop the evil.”

Posey called for Case’s resignation. Myers said he’d heard two of the audio clips that had been sent to him and he turned them over to the board’s attorney, Jim Keith of Adams and Reece in Ridgeland.

Posey asked why they are “spending taxpayer money” to pay a lawyer to hear the recordings.

“Wrongful dismissal lawsuits are expensive, too,” he said.

Posey asked that Case be placed on administrative leave and refused to leave until she got confirmation of that.

Davis said she only came to Brookhaven to pray with other parents in the parking lot of First Baptist Church across the street from the Lincoln County School District office. “I didn’t plan on coming here and putting a noose around my neck,” she said. “We’re scared as hell out there.”

The board met in executive session briefly to discuss two personnel matters. One was the letter by Vaughn announcing his retirement. Myers read the first sentence and the crowd that had just walked back into the board room began to disperse.

Myers told the few people who didn’t leave including Daigle and Posey that if they have any additional evidence besides the two recordings to bring it to him and he’ll take it to Keith. “I’ve talked to him several times over the last few days,” Myers said.

“This is called patronizing an intelligent group of people,” Posey said.

Case was not placed on administrative leave.

The assistant principal at Loyd Star Attendance Center Tuesday turned in a letter announcing his intention to retire. “After 33... read more