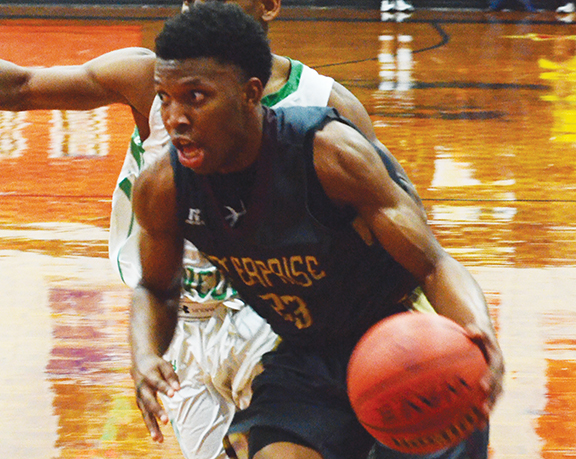 Dwayne Pendleton of Enterprise (23) drives past Ledarrius Jones of West Lincoln in a 49-46 Enterprise win in a game earlier this season. (Photo by Dylan Rubino)

The Enterprise Yellow Jackets went on the road for the opening round of the 2A state playoffs Tuesday night at Newton High School and suffered a crushing loss to the Tigers 59-54.

The loss knocks the Jackets out of the state playoffs and ends their 2016-17 season. Enterprise finished the season with a 13-16 overall record and 4-9 in district play.

Enterprise had the ball with a chance to tie the game as the remaining seconds were winding down in regulation. With seven seconds left, the Jackets could not hit the game-tying three and the Tigers advanced in the playoffs.

“The kids played really hard,” Enterprise head coach Shane Adams said about the loss. “I could not be more proud of the effort or the season we had.”

Enterprise started the game off on an even pace with the Newton Tigers, taking a 13-11 lead at the end of the first quarter. Newton got it going offensively in the second quarter, scoring 21 points and taking a 32-29 lead going into halftime.

With the Tigers taking a 48-43 entering the final quarter of play, Enterprise would have some catching up to do in order to extend their season into the next round of the state playoffs.

The Jackets had their chance to tie the game with less than 10 seconds left, but could convert the basket needed and Newton advanced by a final score of 59-54.

Enterprise will look like a completely different team next year with six seniors graduating, including four of their five starters from this season. The senior starters graduating include Pendleton, Hodges, Carter, Toby White, Darren Richardson and Trevor Freeman.

Dwayne Pendleton has been the engine that keeps Enterprise going all season long and he’ll surely be missed. In his senior season, the star guard averaged 22.4 points per game and just over six rebounds per game.