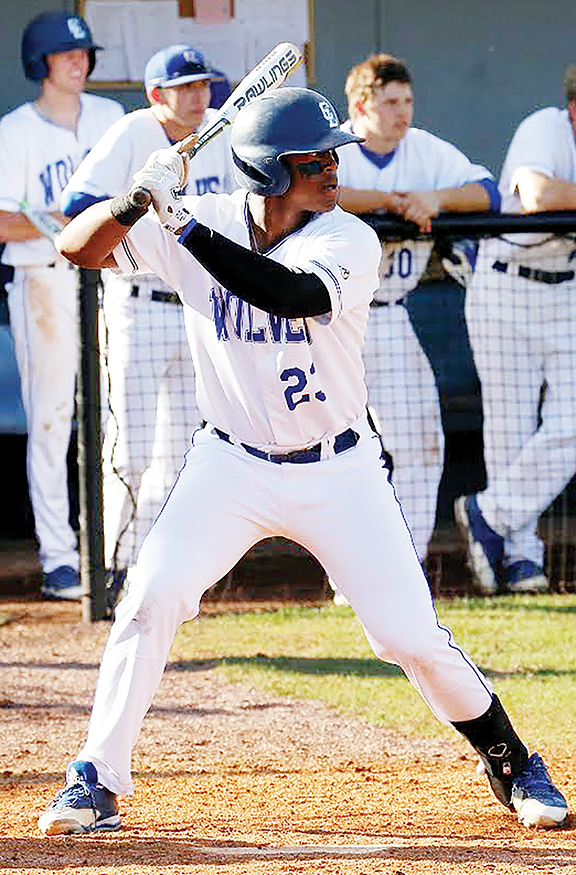 Jaylyn Williams, a freshman from Greenville, went 5-for-12 on the week and drove in two runs for the Wolves. (Photo by Lucas Calvert)

Co-Lin baseball has up and down week

The Copiah-Lincoln Wolves went 2-2 on the week as Co-Lin hosted two midweek double-headers.

The games move the Wolves to 3-5 on the young season. Co-Lin is back on the field Saturday, March 4 as the Wolves travel to Louisiana to face Baton Rouge Community College.

The runs were aplenty for the Wolves in the opening game Tuesday as Co-Lin had 16 runners cross the plate. Bishop State took an early in lead in the top of first, but Co-Lin answered with a run in the bottom of the second to tie the ballgame.

The Wildcats brought in three runs in the third inning to regain, but the Wolves once again answered in the bottom half with six runs of their own. Tyler Ethridge drove in three runs with a triple, while three other runs were scored on wild pitches.

Matthew Mordecai drove in another run for the Wolves in the fourth and reached home on a balk to give Co-Lin a 9-4 lead. Conner Wilkinson and Tyler McLeod both drove in one run apiece in the bottom of the sixth to help secure the 10-run rule victory for the Wolves.

Several Co-Lin scores were the result of passed ball and hit batters. The Wolves were had 12 batters hit by pitches in the contest.

Trammell Martin got the start and the win for the Wolves on the mound and threw four innings and gave up nine hits, four runs (all earned), and two walks. Martin struck out two.

Collin Roberts suffered the loss for the Wildcats after just 2.2 innings. He gave up four hits, seven runs (six earned), three walks, and struck out six.

The Wildcats of Bishop State plated two runs to open the second game in the top of the first inning after a sac fly and a single, but Co-Lin got five across in the bottom half of the inning to take the lead for good. Mordecai drove in one run with a sac fly, J.T. Wright scored two with a triple, and Smith plated another with a single. Hayden White was walked in for Co-Lin.

Smith and Mordecai had drove in two more for Co-Lin in the third and stretched the Wolves lead to 7-3.

The Wolves lead grew throughout the following innings as Co-Lin continued to produce runs.

Blake Sigrest got the start for the Wolves and gave up seven hits, five runs (three earned), zero walks through 3.2 innings. Sigrest struck out two. Tyler Ethridge got the win after he threw just 0.2 innings. He gave up zero hits, two runs (both earned), and three walks. Sophomores Steven Ginn and Ryan Cullop also saw action on the mound.

Wednesday’s opening game was a stark contrast to Tuesday’s, as Co-Lin could not produce runs. Delgado jumped out to a 4-0 lead through the opening two innings and added another two in the fourth, followed by a three-run fifth inning. The Dolphins’ Daniel Lahare drove in four of their runs on two homeruns.

The Wolves managed just six hits, all of which were singles, in the contest.

Christian Day started for the Wolves and suffered the loss after throwing four innings. Day gave up seven hits, six runs (all earned), and four walks. The freshman struck out five. Gabe Smith and Jordan Bowden, both freshmen, also made appearances for the Wolves. Jace Nini threw the complete game for the Dolphins and gave up just six hits on the day. Nini struck out two.

Action was back and forth in game two as the Wolves leapt to a 4-0 lead in the bottom of the second inning. McLeod got the rally started with a double and scored later on a wild pitch. White posted a triple that drove in Blake Estabrook and Wilkinson. Williams followed with a single of his own to bring home White and give the Wolves early momentum.

Mordecai sparked the Wolves in the bottom of the fifth with a solo homerun to left and gave Co-Lin a 5-4 lead. White drove in another run later in the inning and Estabrook stole home on a double steal to stretch the lead to 7-4.

The Dolphins tied the game in the sixth with a two-run homer and a solo shot that swung the momentum back into Delgado’s favor. The Dolphins used that push to plate three runs in the top of the seventh to take a 10-7 lead. Co-Lin was unable to answer at the Wolves went three-up-three-down to close the game.

McLeod and Wilkinson finished with two hits each, while White, Mordecai, Williams, and Estave had one. White led the Wolves with three RBIs.

After taking down West Harrison Monday night in the opening round of the 5A state playoffs, the Brookhaven Lady Panthers... read more