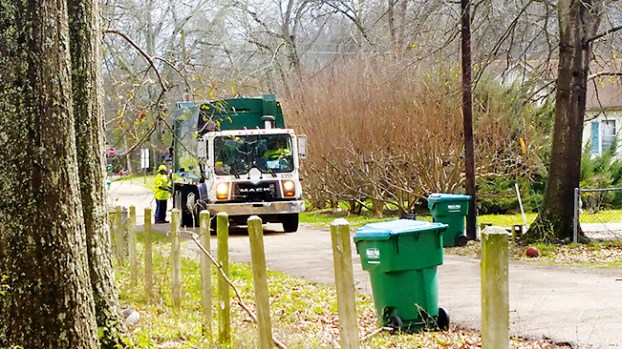 Photo by Brett Campbell/A Waste Pro worker picks up trash this week on a Brookhaven street. The Lincoln County Board of Supervisors complained to company officials Tuesday that trucks regularly miss pickups and that some taxpayers are not happy with the service they’re receiving.

The Lincoln County Board of Supervisors has heard complaints from residents about Waste Pro, and on Tuesday Waste Pro heard from the board.

Chancery Clerk Tillman Bishop started the discussion with Chris Jones of Waste Pro by saying the county has experienced repeated problems with trash pickup, and the complaints were steadily coming in. What is Waste Pro’s policy for dealing with missed pickups, he wanted to know.

Jones said that if homeowners have missed trash pickup, they can call the company phone number and get the dispatcher, who then sends an email to Jones. The company then has 24 hours to make up the missed stops.

“Twenty-four hours? That’s a long time,” said District 4 Supervisor Eddie Brown. “The problem is who cleans up after dogs get into it? I get calls all the time. I have complaints from people who call over and over and over.”

Jones responded, “We call that the 609 route. We’ve had a lot of mechanical and employee problems on that route.”

From there, the discussion turned to the large number of truck breakdowns, wrecks and repairs, as well as the repeated worker turnover rate in the waste disposal company. Setback after setback had negatively affected productivity, Jones said.

“All that’s over with now,” said Brown. “If I get a call next week, come docket time I’m not voting to pay you. I’m ready for a new contractor.”

District 5 Supervisor Doug Falvey said, “One thing I appreciate is that you get in touch with me if there is a problem. However, we’ve been in this contract how long? Four years? Get some equipment that’s dependable. Do whatever you need to do to take care of the customers.”

Brown provided a specific example of a repeated complaint in his district. “Mr. Magee on Sunflower [Lane SW] said his [trash] wasn’t picked up four weeks in a row,” said Brown. “Then we get dog complaints because dogs are getting into it. I know these people. I know he’s putting his trash out to be picked up.”

Jones nodded and responded, “Our problem is getting people trained in these routes, [and] because we have such a turnover.”

Bishop raised his hand and said, “I appreciate that … [But] we aren’t interested in the problems. We’re interested in fixing them. The end of the contract is coming up [next year], so there’s plenty of time to fix this.”

District 1 Supervisor Jerry Wilson spoke up. “When I get calls, I have people that I get to pick it up. I appreciate you responding. I know you’re having a lot of turnover, but it’s every week,” he said.

District 3 Supervisor Nolan Williamson told about one of his district’s residents watching Waste Pro pick up her trash. “She saw the boy throw a trash bag at the truck, but it hit the truck and busted,” said Williamson. “Some smaller bags of trash fell on the ground. He picked up some of it, but left the rest laying there.”

Jones responded, “I wish I knew who it was that did that, because I would certainly take care of it.”

Bishop thanked Jones for attending and for his promise to relay the board’s concerns to his supervisors.

• The board heard from Patty Campbell, a representative of a business in Baton Rouge offering health screenings for public employees. County Administrator David Fields recommended the board double-check health coverage before responding.

• The board voted to refund $140 to the family of a customer who was billed for garbage pickup after he died.

• The board approved $200 from the District 1 account to be used to pay for membership fee and conference fee for the Mississippi Minority Caucus.

• The board approved a reimbursement of $644 to the city for one half of the monthly bill for lighting along I-55. This was twice the January amount, due to several lights having been repaired since the last bill was paid.

• The board acknowledged receipt of a letter from the state auditor that says the county is in good standing, pending CPA payment.

• Minutes for the previous two meetings were approved.

• County engineer Ryan Holmes said he had responded to an email from the Mississippi Economic Council requesting specific information on what roads needed to be repaired within the county. MEC urged as many people as possible to submit this information, saying that more complaints might draw the state Legislature’s attention.  Holmes asked board members to respond, as well.

What started out as a routine meeting of the Lincoln County School Board Tuesday night, quickly turned into chaos and... read more