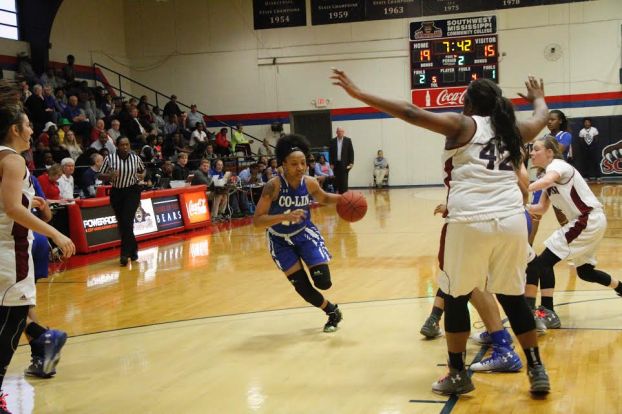 Tenazhia Hinkson of Co-Lin drives to the hole in their win over Southwest in a game earlier this season. (Photo by Natalie Davis)

The Lady Wolves finished 19-3 overall and 12-2 in the MACJC South and will be in action Monday, Feb. 27 at 3 p.m. as they play in the first round of the MACJC State Tournament versus East Mississippi. The game will take place in Ellisville on the campus of Jones County Junior College.

“We struggled with our rhythm in the first half,” said head coach Gwyn Young. “Luckily we shot better, and started rebounding the ball in the second half. The more rebounds you get the more opportunities you have, so that really helped us.”

The Lady Wolves had some of their slowest quarters of the season in the first half scoring just 14 and 10 points respectively. The slow start was matched by PRCC, which allowed the Lady Wolves to take a 24-16 lead into the locker room at the half. The inability to score came from a variety of reasons including, missed shots, turnovers, and a lack of rebounding.

Co-Lin looked much more like their regular selves in the second half of play as the Lady Wolves quickly ran away with the lead. An 18-2 run in the final minutes of the third quarter gave Co-Lin a 21-point lead.

In the fourth, the Lady Wolves slowed their pace and allowed many players to come off the bench and see action. Even with the conservative coaching the Lady Wolves continued to stretch the lead and finished the game leading by 25 points.

Karry Callahan led the Wolves in scoring as she netted 14 points and grabbed seven rebounds. Alexus Holt added 10 of her own, while Diamond Smith and Princess Cohen both finished with eight. Smith led the team with nine boards.

Rehema Franklin led PRCC with 16 points, while Adyn Strickland and Charisma Walker both finished with seven. Strickland led the Lady Wildcats with 10 rebounds.

The Copiah-Lincoln Community College Lady Wolves softball team will honor the military during their home opener against the Mississippi Delta... read more