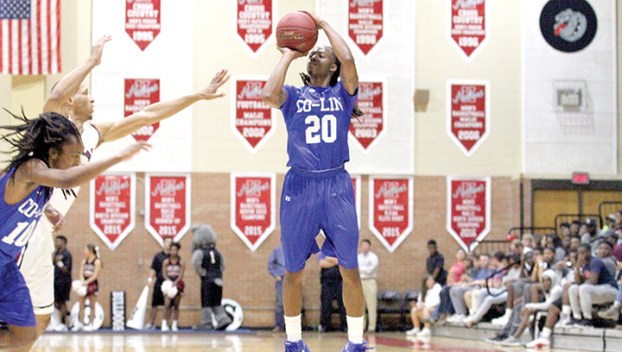 Photo by Natalie Davis/Lamarcus Lee finished the game with 13 points and five rebounds for the Wolves in a game earlier this season.

Wolves fall to PRCC to close out 2017 season

The loss gives the Wolves an overall record of 10-13 and 4-10 in the MACJC South Division.

“We just have a hard time scoring the basketball, I’m hoping we will be a stronger more mature team next season,” said head coach Kenny Bizot. “We will have a different toughness about us next season.”

Both teams lit up the scoreboard in the early minutes of play as Lamarcus Lee went 3-for-3 for the Wolves from three-point range in the first three minutes. The Wildcats trailed by seven with 15 minutes remaining in the half.

An 11-1 run over the next six minutes gave PRCC a three points lead. Co-Lin took a one-point 21-20 lead briefly with 7:35 remaining, but the Wildcats responded and did not surrender the lead again for the remainder of the contest.

In the second half, PRCC poured in the baskets and stretched the lead to 20 with just over 10 minutes left. Co-Lin simply could not make stops on the defensive side of the floor to set up a scoring run. The Wildcats hung on late and secured the 82-67 victory.

Lee led the Wolves in the scoring column with 15 points followed by Tyrell McArthur who netted 12. Anthony Jones came off the bench and added 11, while Youry White poured in six. Jones was also the Wolves leading rebounder with eight rebounds.

Eli Arcement led the Wildcats with 21 points after going 6-for-11 from three-point range. Javontae McDavid added 12 points and Adrian Williams rounded out the Wildcats top scores with 10.